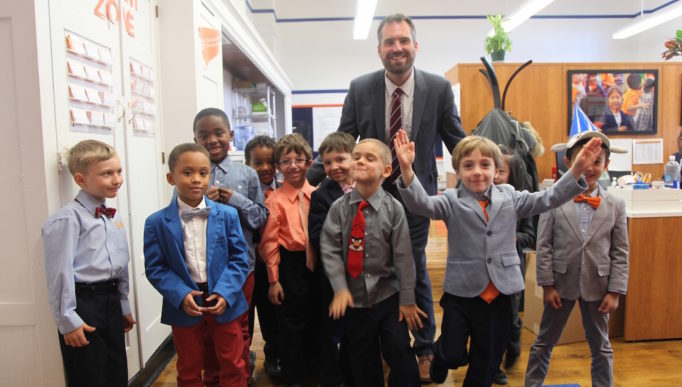 On Tuesday, Oct. 20, Success Academy Bensonhurst principal Jonathan Dant opened the school doors at 7:15 a.m. to greet scholars as usual, only to be surprised by a large crowd of families and scholars singing “Happy Birthday” and wearing outfits that looked, well, a little familiar.

Instead of their Success Academy uniforms, some scholars were dressed like Mr. Dant, wearing suits—some even painted on beards!—while others wore the colors of his alma maters: Indiana University Bloomington red and Columbia University blue. The scholars were teaching Mr. Dant that imitation is indeed the sincerest form of flattery.

Mr. Dant is a beloved figure in our school community. He is the friend who is impossible to shop for—that person who always makes your life special, but whom you can never find the right gift for to show how much you care. This surprise birthday celebration was our way of saying how much we appreciate what he does for us every day.

How did we pull off the surprise? The idea to dress up like Mr. Dant came from a kindergarten scholar and actually had been presented to Mr. Dant as a theme for Halloween. Not wanting to be the center of attention, he shot it down.

But the staff at our school was undeterred. We plotted to execute the idea anyway—as a birthday surprise. During the week leading up to his birthday, we were so worried that one of the scholars would give the surprise away! In fact, one girl almost did, proudly announcing to Mr. Dant that she planned to wear red on Tuesday rather than blue. He asked the staff what was going on, and we plead the Fifth. Every staff member in the office deserved an Oscar for that performance!

To pull off a truly meaningful birthday surprise, we knew we would need the boundless energy of our families, too, and so we reached out to our parent council for help. Polina Bulman, the president, immediately took the lead, planning an event more special than we ever imagined.

When Leah told me the idea for Mr. Dant’s birthday, I was happy to help. It was an opportunity for our community to go beyond Z and give back to Mr. Dant, who has given so much of his time and energy to every scholar at this school, including my daughter, who is in the first grade. Mr. Dant sets the tone for our community—every time I leave the school after a visit, I feel energized. He and his staff make the school a truly magical place for our kids.
I never thought that my child’s school could be so much more than a place where she learns—the community feels like a family!

With the help of other parent council members, we were able to spread the word and gather the entire community in front of the school at 7:10 a.m. The night before the surprise, I texted Leah to ask if she could stall Mr. Dant inside the building before he opened the doors. She replied: “An atomic bomb wouldn’t keep Mr. Dant from opening that door a minute late.”

I was excited when the day finally came and families and scholars surprised Mr. Dant at the door with a cake, birthday hats, and a rousing chorus of the birthday song. When the kids ran to Mr. Dant to give him a hug after finishing the song, it brought tears to my eyes. This moment was absolutely pure and candid, and so beautiful. Every principal should be loved this much. And of course it goes both ways: all kids should be loved this much by the principal and the school staff!

See this video of the fantastic celebration.