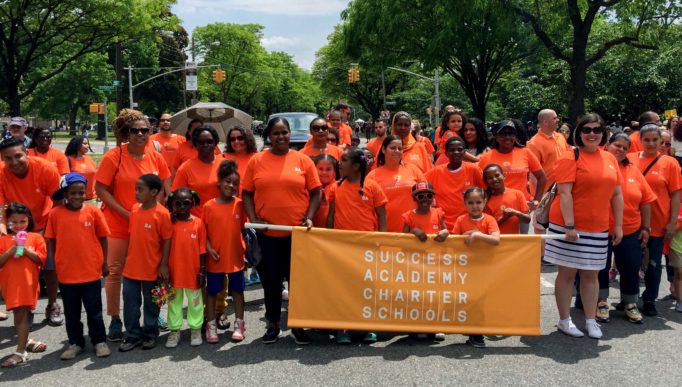 Today, about 60 scholars, parents and teachers from Success Academies Bronx 3 and 4 – led by School Leaders Colleen Stewart and Shea Reader – showed off their Bronx pride in the 44th annual Bronx Week Parade.

We were honored to have been invited to march by Borough President Ruben Diaz Jr., and it was such a great day!

There were marching bands and local celebrities and sports teams and community groups and schools – so many schools, showing how important education is to the people of the Bronx.

A special shout-out to Rep. Charlie Rangel, State Senator Gustavo Rivera,  Assembly Members Jeffrey Dinowitz, Marcos Crespo, Mark Gjonaj, and Michael Blake, and City Council Members Andy King, Vanessa Gibson, and Andrew Cohen, who came out to celebrate this great day, and a big thank you to Borough President Diaz, who gave us a chance to strut our stuff for the whole Bronx to see!

Our bright orange T-shirts and banner with “Success Academy Charter Schools” in huge letters left no doubt as to who we are and how much we love our community and our schools.

Amazing things happen every day inside Success Academy’s classrooms. Working in schools can be challenging, but there are always experiences that make the hard work worthwhile. Our teachers focus intensely on creating a perfect learning environment — planting the seeds and providing all the ingredients for our scholars to blossom intellectually, socially, and emotionally. To... Read more

Protecting the planet, one world-class school at a time

Over the past two weeks, all eyes were on world leaders as they convened in Glasgow for the 2021 Climate Change Conference; the health of our planet has never been more critical. At Success Academy, our standard for excellence includes an investment in sustainability and an environmentally responsible approach to our operations and physical spaces.   ... Read more