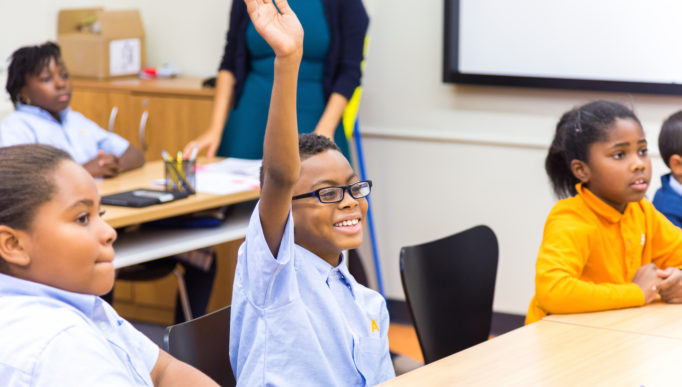 On Tuesday, November 8, as the returns come in on election night, Success Academy scholars will likely be watching for those red and blue states to flash across their television screens, eager to know if the candidate of their choice is headed to the White House. Since the primary season began, I have thought hard about how we as educators will help students navigate this election season.

The unusually contentious and divisive nature of the 2016 presidential campaign has captured the attention of the nation, and our middle school scholars at Success Academy are no exception. They watch the news and see the headlines. They have heard politicians and their supporters say things on television that are shocking to me as an adult. As someone who manages history curriculum across eleven middle schools, I never thought I would be helping teachers and students engage in conversations about the inappropriate language that has come from G.O.P candidate Donald Trump. While some educators are reluctant to teach the specifics of this campaign, we think it’s really important to encourage scholars to express their feelings about such comments, while acting as non-partisan facilitators during these classroom conversations. For many middle school students, this election marks the first time they are experiencing a presidential campaign as young adults, and I worry about what they will take away from the 2016 campaigns. Here’s what we’re doing  at Success Academy to teach civics in an election year like this.

First, we want scholars to understand how our election process works. Like all subjects we teach at Success Academy, we believe that students learn best by doing. Civics education is no different. On October 31, Success Academy’s 2,300 middle school students will use former Supreme Court Justice Sandra Day O’Connor’s iCivics ‘Win the White House’ website to craft their own political campaign for president. As they proceed through their campaign simulation, they’ll have the opportunity to establish a policy platform, poll voters, fundraise, launch media campaigns, and make appearances in key states. This exercise will provide a real-life example of how our electoral college works, how money and media can shape an election, and the challenges that candidates face during election season. Afterwards, our teachers will help students reflect on the simulation, asking questions like, “Does the campaign process give all Americans the chance to learn about a candidate and make informed decisions?” and “Why did you choose to spend time campaigning in some states, but not others?”

Like all subjects we teach at Success Academy, we believe that students learn best by doing. Civics education is no different.

Once they’re familiar with the electoral process, middle school scholars will learn how to make tough decisions about which candidate deserves their vote. At Success Academy, we think that the role of civics and history education is to teach our scholars how to think, not what to think. Given how the election has dominated our news cycle, it’s not surprising that many of our scholars can name who they’re voting for — but we want them to be able to articulate why they support a given candidate.

On November 1, scholars will study a nonpartisan framework for evaluating a candidate for office. They’ll learn how to read a candidate’s issue positions and party platform, how to research key endorsements and funders, and how to evaluate public statements and candidate biographies. They’ll be encouraged to evaluate candidates by researching their profiles using non-biased sources like VoteSmart.org and examining their own values, instead of relying on the reporting of one or two media outlets to form their opinions. At the end of the class, scholars will use their framework and head to the polls: They’ll vote alongside thousands of other children across the country, taking part in a national online student voting platform sponsored by Newsela, Rock the Vote, and other partners.

After an election campaign fraught with scandal and personal attacks and light on discussion of real policies that will determine the course of our nation’s future, it is more critical than ever that citizens do the important work of ensuring their vote is well-informed. At Success Academy, we’re confident that our scholars will be prepared to be lifelong members of the United States electorate who possess the skills to sift through the soundbites and choose candidates who represent their values.