Solving Problems and Jumping Rope: One MilVet’s Life as a Business Operations Manager

After serving in the military for over 11 years, John Bolsch joined Success Academy in May 2018 as a Business Operations Manager (BOM). We spent the day with John to learn more about what it takes to remain proactive and responsive to the fast-paced nature of school operations. Read more 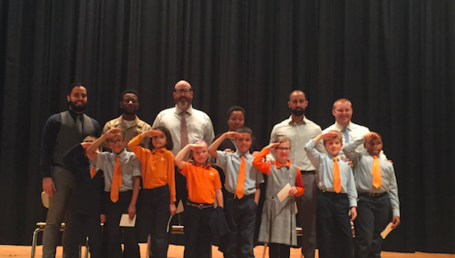 Why We Celebrate Veterans Day

Getting scholars to pay rapt attention during an assembly is no easy feat, but that’s exactly what the panelists at SA Upper West’s Veterans Day Community Circle were able to do. The event was the brain-child of Assistant Science Teacher, Juan Rosario, an Air Force Veteran of six years. Inspired by his scholars, he wanted to do something to help them understand why we celebrate Veterans Day—by meeting and hearing from real veterans. Read more After Leaving to Serve His Country, Teacher Returns to Say Thank You

Our school has not been the same since Chris took his leave of absence in December, but we were thrilled that he returned Feb. 19, even if for only one day. Read more