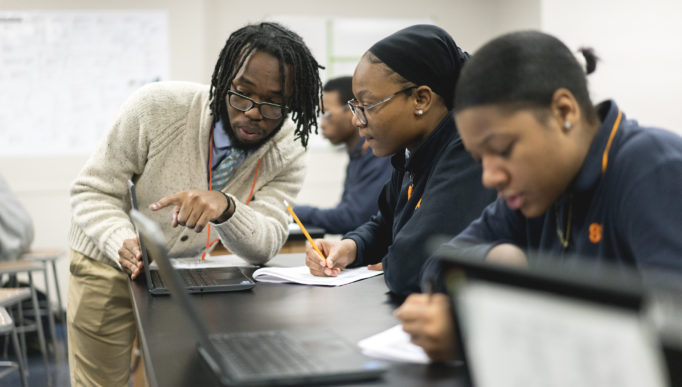 It’s the beginning of spring break and the day before first-year teacher Travis Brady’s birthday. He’s thrilled about the time off and upcoming celebration — but he is also eager to talk about his students.

“I can’t get over how talented they are in so many different areas,” he said. “I recently got to watch them perform In The Heights, and was blown away by how well Genesis, who’s also a great student, can sing. I was so proud of her watching her up on stage.”

Mr. Brady, who teaches biology at Success Academy High School of the Liberal Arts, has made a point of getting to know his scholars outside of the classroom. After school, if a student needs a teacher to supervise a dance rehearsal, Mr. Brady happily volunteers. Before homeroom, he and a couple of his colleagues have a standing invitation to all students to join them on the basketball court — a not-so-subtle strategy to get teenagers to school early enough that tardiness is never an issue.

In the classroom, Mr. Brady weaves personal connections into every lesson he can — he knows that relatability is key. During a lesson on protein denaturation, he looked for a way to make the science feel applicable to his students’ daily lives.

“I know many of my students straighten their hair, so I explained that the reason straightening irons work is because when proteins get hot, they denature,” he said. “That got them hooked, and then keeping them engaged throughout the rest of the lesson was easy.”

Mr. Brady learned the importance of engaging classes from his own teachers, the ones who helped him fall in love with science when he was growing up in the Bronx — the same community many of his students hail from. That shared hometown is another tool Mr. Brady leverages to build relationships.

“They feel like I’ve walked the same path that they have, and that can help them feel comfortable opening up to me,” he said.

This spirit of openness has been critical for Mr. Brady, not just with students, but with his colleagues as he navigates his first year in the classroom, a notoriously tough time for new teachers. Brady came to teaching with some experience under his belt — he had taught and mentored local New Haven students while an undergrad at Yale — but he knew that being a full-time educator would come with a learning curve.

“What’s really helped me develop as a teacher is just asking other teachers who are doing a great job to give me feedback,” he said. “They know me and, in many cases, they also know my students, so the things they notice are just hugely valuable.”

Thanks to his fellow teachers’ support, he’s helped many of his students discover the same love of science that he himself found in school. During a recent lesson on genetics, Mr. Brady explained to his students the scientific reasons for the differences among people they had always noticed but never quite been able to explain.

“Different genes control the pigment in your skin, and in places closer to the equator, it’s beneficial to have darker skin that can protect you from intense sunlight,” he said. “The opposite is true for people from colder climates.”

His students sat up a little straighter, their interest piqued. “Is that why people from Ireland and Scotland have such lighter skin than people from Africa?” one student asked. It is, Mr. Brady confirmed.

The students looked at each other, nodding. Mr. Brady had helped answer a question many of them had wondered about for years. They looked back up at him eagerly, waiting for him to go on.