I’m a founding parent of Success Academy and, since way back in 2006, it’s been a partnership. That’s when my son Justice started first grade at SA Harlem 1; today, my daughter Madison is a sophomore at the Manhattan high school and my grandson Caleb is a fifth grader at SA Harlem East MS. To me, Success Academy is more than a school; it’s family, a foundation, it’s history.

I was drawn to Success because as a school it reflected everything I am as a parent. It provided structure and consistency, and made academic education the forefront while providing opportunities to grow in other areas. I always wanted to instill a sense of purpose with my kids. SA helps instill that by providing children opportunities to see firsthand what hard work can lead to. My own academic journey truly started when Justice was an elementary school scholar at Success. When I first moved to New York from South Carolina, I was struggling at the time to find a decent job. I decided I needed to do something to better myself, and realized education was the key. I started out by pursuing nursing school. While unfortunately that didn’t work out, I used that setback to motivate me rather than deter me. I’ve since gone on to obtain four degrees, most recently achieving my goal of getting a master’s degree in Public Health.

My son Justice had a similar setback, but he also went on to achieve his goals. In elementary school, Justice kept up with the rigorous pace of Success, but he struggled to stay structured and focused. In third grade, working with his teachers and school psychologist, we found out he has ADHD. In addition to seeking outside help from doctors and specialists, I formed good relationships with Justice’s teachers at SA. We worked together to help him stay focused, find his strengths and build his confidence as a learner who needed extra support. Academically, Justice kept up fairly well through middle school, but with his ADHD being sporadic, his behavior was up and down. In high school it was the same, and while his teachers and I tried to keep him engaged, it was hard.

In eleventh grade, Justice and I ultimately made the decision that a different school would be better for him. When he transferred, SA’s teachers and school psychologist helped us navigate the process of getting documents, advising, and preparing Justice for interviews every step of the way. It was a difficult decision, but I knew it was for the best. Even once he started at his new school, the door at Success was not closed; I knew I could still reach out about anything.

At his new high school, Justice soared. SA laid a very good foundation in terms of how he studied, what’s important, and how to ask questions. His teachers were excited to have him in class, because he was so engaged. After graduation, Justice decided to go to the Army and serve his country. He graduated from boot camp and is now stationed in Fort Gordon, Georgia as a Signal Support System Specialist. He recently received his first assignment: he will be stationed in Vilseck, Germany, for one year. That’s where he will attend Airborne School and pursue the German Armed Forces Badge. I could not be prouder of what he has accomplished, and I’m grateful Success Academy gave him the foundation to succeed.

I wanted to show my children and grandson by example that going after what you want may be hard, but just because it’s hard doesn’t mean it has to present a barrier. They witnessed my journey every step of the way: by seeing me read huge books, writing 80-page papers, and staying up late at night, they’ve seen that it’s not easy! But I wanted to show them the importance of  getting a good education and a decent job, and that they can do anything they want to do. My educational accomplishments have provided me with self-confidence, pride, and motivation. I want my children and grandson to experience that, so I encourage them to go after their own goals. What better way than to show them I can do it?

Now Madison and Caleb are still figuring out their own interests and passions, and I try to support them in that. Last summer, Madison went to Alaska through the Summer Experience program (Justice developed his own ambition through this same program, but at Boston College, where he studied Business & Leadership). This year, her new goal for the summer is to attend an engineering program out of state. In addition to being a bit of an explorer, Madison is a member of the volleyball club and wants to get back into art. In middle school, she was part of the track team and her basketball team at SA Harlem East MS won the championship two years in a row. Caleb loves chess and has been part of the chess club since 3rd grade. Like Madison, he loves traveling, and they both have green belts in taekwondo. As a parent and a grandparent, I allow — and encourage — them to have their own voices, and if they want to do something I try to make that happen. Even if they want to go whitewater rafting next summer, I will try to do that — it’s outside of my comfort zone, but I’ll try!

I’m proud of the foundation that Success sets, and I’m able to build on top of that as a parent. Ms. Moskowitz always says it’s a marriage, and it is. In order to make a marriage work, all sides have to come in and do their part to their best ability. That’s what I do as an SA parent. 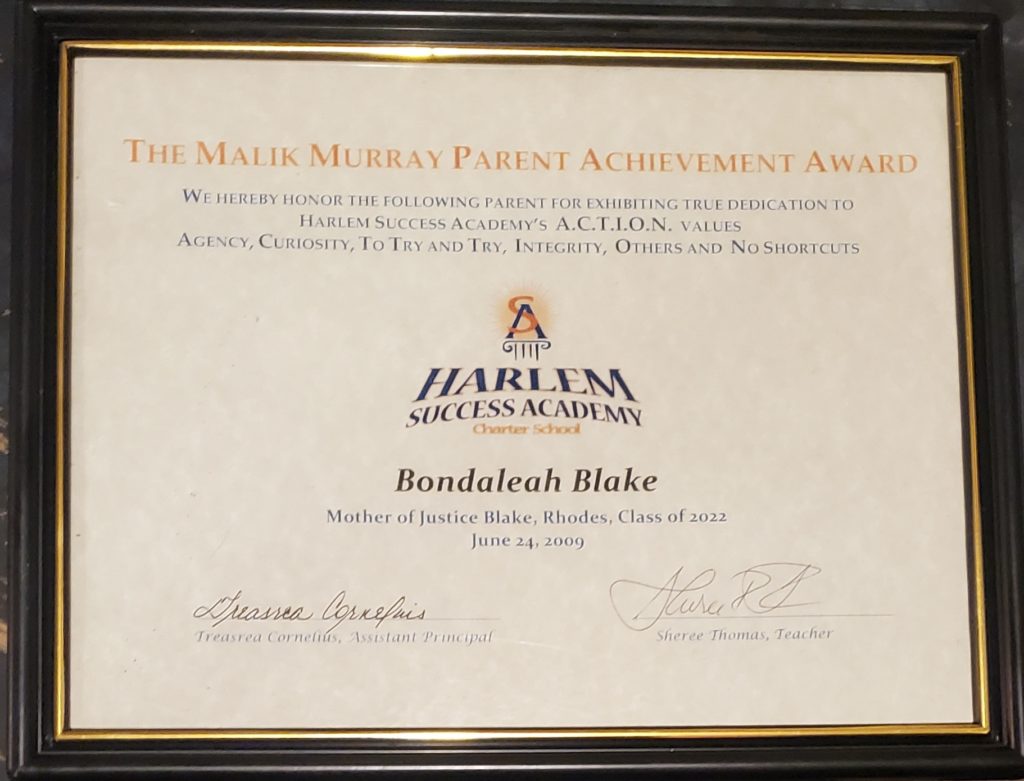