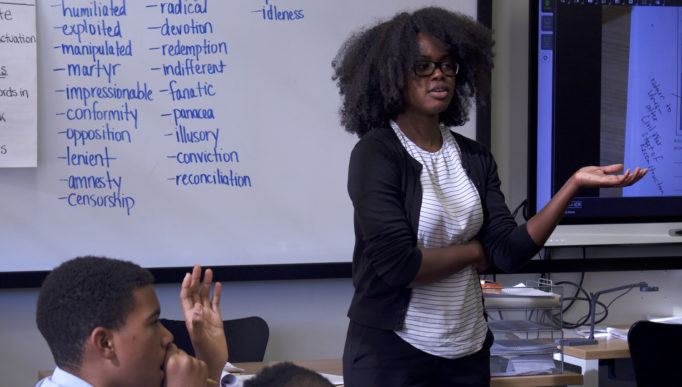 It was 2017 — Eni’s first year of teaching at Success Academy. After graduating from Harvard University, she joined Success in July, and from that moment on, it had felt like she was on the world’s craziest roller coaster. There were ups and downs, highs and lows, and it all happened at breakneck speed.

“There was just so much information at first…and the teachbacks!” Eni says, referring to the mock lessons that new teachers deliver and receive real-time feedback on during T-school. “The teachbacks were helpful, I learned a lot — but they were also super intense.”

On the whole, Eni’s experience at T-school was both exciting and a little nervous-making. Everything was so new, and even after T-school was over, and she had joined her fellow teachers at SA Harlem East for additional training and prepping for the first day of school, she felt dizzy with questions.

“I was just so baffled about everything.” says Eni. “Why is the classroom set up this way? Why do we have a poster listing our classroom expectations? Even something like the big laminator in the Teacher Work Room. How was that supposed to work?

In mid-August, the students arrived back at school and along with her co-teacher,  she was now in charge of her own seventh grade history classroom — and the academic progress of 60 seventh graders. There was a lot to love. She and her co-teacher worked well together, and she was thrilled by the extent to which the SA history curriculum emphasized primary historical documents.

“There’s a big difference between a teacher telling you ‘Teddy Roosevelt had a big stick foreign policy’ and reading what he actually said and deciding for yourself. It makes it all a lot more real-seeming to the kids,” Eni says.

And yet despite all the positives, Eni found herself working at a pace that she feared was unsustainable. After scholars left at 4:30pm, there was tutoring and meeting with parents and studying the materials and mapping out questions for the following day’s lesson. After that it was time to grade assignments and make improvements on the aesthetics of her classroom. Several nights a week, Eni didn’t leave school until 7pm.

By mid-November she knew something had to change, especially when it came to preparing for lessons. It took up the largest portion of her time, but the results of the latest assessment had been lackluster. Her students hadn’t shown what she knew they were capable of.

“I was just so tired…and frustrated,” Eni says. “…I ended up taking the assessments home with me over Thanksgiving just to see if I could get a get a clue what the problem was.”

Thanksgiving can be a difficult time for first-year teachers. The bulk of the year still lies ahead, but the job hasn’t necessarily gotten any easier. For Eni, though, the holiday proved to be a time of genuine discovery — and it all came as a result of looking more carefully at her scholars’ work.

Page by page, she studied their assessments, paying special attention to the kind of questions that her scholars consistently struggled with. She knew already that they had not done very well on the multiple choice portion, but soon it became clear that there was a larger issue: it was their main ideas. They weren’t drawing strong main ideas from the text!

To Eni, this came as a small revelation. Now she knew what the problem was. Now she had a concrete target on which to focus her energies.

“It made me realize that I was working hard, but not super efficiently, that I could save a lot of effort in preparing my lessons if I studied scholar work more closely.” Eni says. “It didn’t change overnight, but that’s what I started to do, and things got easier.”

Now Eni is teaching for her second year at SA Harlem East. There are still plenty of things that she would like to improve on, and she still works hard, but she also feels freer to appreciate what she loves about teaching: the wide-ranging class discussions and the excitement that scholars show when introduced to a new piece of history.

She also feels freer to appreciate what she loves about teaching: the wide-ranging class discussions and the excitement that scholars show when introduced to a new piece of history.

She recalls a particularly gratifying moment that occurred late last year, after her Thanksgiving epiphany. Her class was having a discussion about race during the “progressive era” when one of her scholars, Ashley Brown, raised her hand and made a point that left Eni feeling both glad and grateful.

“Ashley pointed out that the justifications that people made at the time for Plessy vs. Ferguson echoed the justifications for the black codes during reconstruction, and slavery before that. It was a really sophisticated point and it drew on discussions that we had had earlier in the year…It just made me stop and think, ’Wow, look how far we’ve come.’ ”