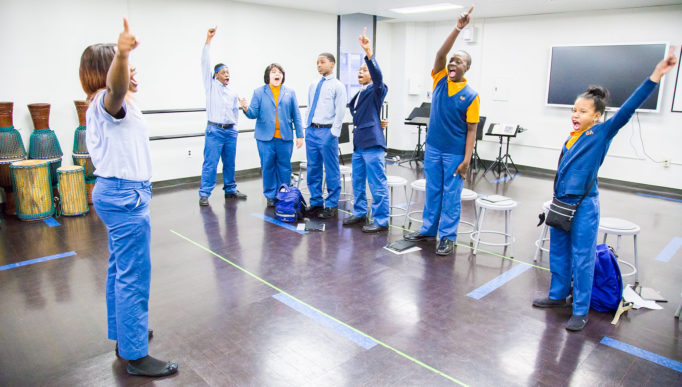 This Friday and Saturday, 22 scholars from Success Academy High School of the Liberal Arts will perform in the school’s musical production of Schoolhouse Rock Live! It’s a show that follows a nervous new teacher on his first day with students.

I have to admit I was a bit nervous myself when our scholars started this journey earlier this year. I remember the first rehearsal, when the cast heard about rehearsal times. “Ms. Edwards, I can’t possibly stay after 5:30 pm,” they said. “I have a social life!”

Their commitment and perseverance were tested during a tech rehearsal this past Saturday. A tech rehearsal is the day when every element of the show — costumes, lighting, sound, music, and acting — must come together. It usually takes a full day and involves many “holds” and “re-dos” that can test an actor’s patience.

Watching the cast and crew work together on Saturday, I realized how much progress they have made since their first rehearsal. All of them showed up with scripts in hand and were patient as we worked to perfect the show. The cast was quizzing each other on their lines while the crew painted our set with colorful mosaic patterns and helped hang lights.

While they were having fun, the kids showed tremendous teamwork and grit throughout the day.

The show also has given scholars a chance to bond with teachers outside the classroom. The band for the show includes teachers who will be rocking out with the cast on stage. Moctar, a ninth grader who plays guitar, learned so much from playing alongside his teacher, Mr. Fancher. Jayleene, an eight grader, discovered that Ms. Melindo, the Spanish teacher, plays the violin. One of my favorite moments was seeing Jayleene take a break from arranging stage props to learn about the violin from Ms. Melindo.

This show would not be possible without all the efforts of our fantastic community of teachers, scholars, and parents. We look forward to watching our scholars shine at their performances and hope to see you all at the show. Showtimes are Friday, May 15, at 7:00 pm and Saturday, May 16, at 2:00 pm and 7:00 pm.