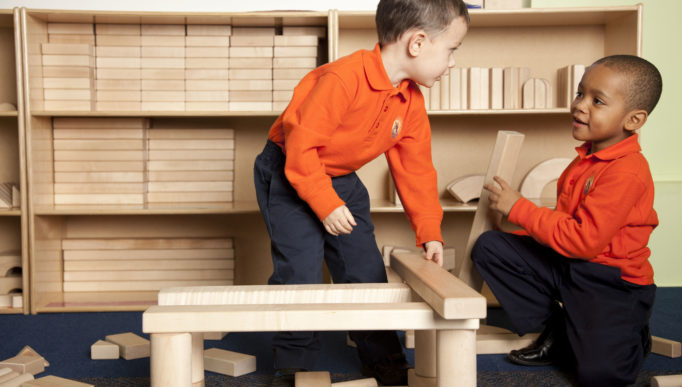 I teach “blocks.” When I tell people this, I get a wide range of reactions, from raised eyebrows to blank stares to eye rolls. I’m not a typical classroom teacher, but what I teach students is no less valuable than the math and science they learn every day. In fact, what might seem on the surface like children just playing actually involves some of the most genuine and organic learning you’ll find in the entire school.

I am officially known as a blocks teacher at Success Academy, and I work with our kindergarten scholars. I have my own classroom, lined from wall to wall with wooden blocks, Legos and oversized hollow blocks. On my classroom shelves are bins with human and animal figurines, scraps of fabric and carpet, Post-It notes and seashells. In the corner, there is a library of picture books featuring famous buildings from all over the world. On the walls, gorgeous visuals inspire my scholars’ creations: well-known architectural landmarks, vocabulary words and pictures of their own beautiful work. And at the center of it all is a huge empty carpet space – a blank canvas that they fill with their creative ideas and stories!

While there isn’t a detailed curriculum for blocks, our work is rich with teachable moments. Each day, we huddle in a circle to review the rules that keep us safe, discuss ways to show good teamwork – and then they “go build.” In moments, the room is transformed into a little city, complete with a zoo, school, restaurant, castle, the White House and a race track for cars. As the scholars scurry around the room, adding details to their designs, I circulate and ask questions about their work: Why did you choose to put this right here? How did you finally get this block to stand up? What can we do to fix this problem?

Along with the math and science that naturally go along with block play (fractions, measurement, balance, the forces of gravity), I try to push the limits of what we generally think 5-year-olds are capable of doing. When scholars decide to build a bridge, I approach them with pictures of different types of bridges. We look closely at their design and discuss how we can use blocks for their ideas. If a team chooses to build a structure like the Taj Mahal, I invite them over to the Smartboard and we use Google Earth to zoom in and examine the three-dimensional details of the building. When a scholar has a difficult time organizing her plans, I provide her with paper and pencil to sketch out the idea first and use it as a blueprint. A group that builds a house is pushed to create characters and a storyline. Every moment of their exploration and “play” is rooted in learning and discovery.

Scholars also learn problem-solving skills, such as how to compromise when arguing over where to put the door to the castle or whether or not a tiger makes an appropriate pet for the family. By the end of their kindergarten year, my 5-year-old scholars have become experts at talking out their ideas and concerns, collaborating on joint efforts and strategizing together to overcome bumps along the way.

Every day, I am blown away by their imaginations and creative solutions. I remember Sebastian, who worked tirelessly on a life-sized bicycle that he was actually able to sit on after he finished! And Shane, who had such an incredible understanding of New York City’s architecture that he was able to re-create both the Manhattan Bridge and the Brooklyn Bridge with amazing detail, outlining for me the “obvious” differences between them. My scholars are so inventive that I’ve learned to stop saying “no” to strange requests for materials. I prefer to watch their ideas unfold instead.

Admittedly, it takes incredible patience to allow for some of the organized chaos and confusion that goes along with letting scholars solve their own problems. Scholars argue; buildings fall; eyes well with tears. While it would obviously save time and energy to just tell the scholars what to do or how to fix their mistakes, instead, by purposely allowing for moments of struggle, I enable my scholars to become a stronger community of thinkers who are far more likely to solve problems on their own in the future.