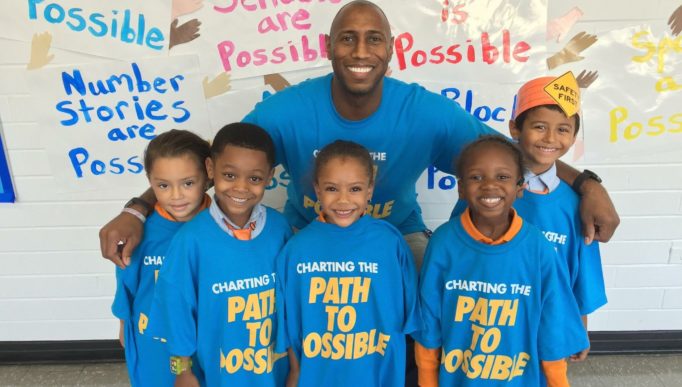 The past year has been a busy one for Ty Redmond: he moved from the Bronx to Queens, founded a brand new Success Academy school in Far Rockaway, and established a community of education reform-minded parents. All this has made for a challenging but fulfilling year — and that’s exactly what Mr. Redmond was going for when he made a bold career change four years ago.

A medical device salesman for 10 years, Mr. Redmond wanted to find more meaning in his daily life, which led him to begin volunteering at a New York City charter school. There, he found education wasn’t just a reprieve from his work life; it was a passion that could turn into a career. With that in mind, he applied to Success Academy’s Leadership Fellow program, and spent the next three years at Success Academy Bronx 1.

We spoke to Mr. Redmond about how he went from salesman to principal, and how starting as a Leadership Fellow paved the way for his unexpected future.

Why did you apply to be a Leadership Fellow at Success?

I grew up in a two-parent home in Racine, Wisconsin, which had one of the best public school systems in the state. I was well-prepared for college and even became the captain of the football team (at the University of Wisconsin Whitewater). As I got older, I began to appreciate just how good a hand I was dealt — I was one of the lucky kids in America, and I knew that tons of other black kids didn’t have the same opportunities that I did.

After college, I worked in medical device sales for a decade (in northern New Jersey and New York City) and was doing well career-wise, but the work just wasn’t fulfilling. I’d always felt a huge commitment to young brown and black boys in particular, and I wanted to make sure they had the same positive role models in life that I had growing up — my dad, uncle, and coaches all made positive impacts on me. So, I started looking for volunteer work. A friend connected me with an after-school mentoring program at a charter school, and I really loved it. My mentees and I would work on homework together, play games, and I’d offer life advice. Around that time, I saw Success Academy’s listing for Leadership Fellows, which mentioned that you didn’t need to have a traditional education background. I thought, “Wow — they literally made this job for me.” I applied, and the rest is history.

What was appealing to you about SA’s approach and mission?

When I was researching the Leadership Fellow position, I found that I was really aligned with SA’s dual mission. Years ago, I read The Shame of the Nation by Jonathan Kozol, which discusses the tragic state of urban public education. I remember reading it and thinking, “Who is going to step up and do something about this? Who is brave enough to make a difference?” I knew that’s what Eva Moskowitz and Success were doing, and by joining their team, I could make a difference too.

How did being a Leadership Fellow prepare you to become a principal?

From day one, my principal at SA Bronx 1, Michele Caracappa (now SA’s Chief Academic Officer) supported my growth as an educator and school leader. First and foremost, I had to teach — I taught kindergarten science every day. I also ran several school-wide programs, including a daily structured recess and a school culture academy to help families learn about the importance of SA’s unique approach to school culture. But maybe the most important thing I learned was how to approach being a school leader. There was such an emphasis on building relationships with families, scholars, and staff, and really giving every single community member a high level of respect. I had to have some very tough conversations with parents as a Leadership Fellow. But when you put respect first and remember that you’re all working as a team toward the same goal, you are so much more effective. Even now, when I visit SA Bronx 1 and see parents with whom I had strong disagreements, they will give me big hugs. And you know what? So does the school safety officer.

Success also has an incredible professional development program. We had seminars and trainings that taught us how to look at the big picture — how does what’s happening at SA Bronx 1 compare to the whole network or the whole city? Are our kids getting the world-class education we promised them? Of course, there were more technical trainings too, like how to analyze scholar data or implement a new curriculum. SA’s professional development gives us the skillset to run a school the right way.

What’s the silliest question you’ve received from a scholar?

One question seems to keep coming up over and over again during our Project Based Learning units on schools and during career days. Scholars keep asking: Does Mr. Redmond do anything besides walk around?

I guess I do walk around a lot — I’m observing classes and making sure things are running smoothly!

What is one piece of advice every new SA Leadership Fellow should know?

You should teach a class. That was so important to my development — because of my experience in the classroom, I am much better at relating to what my teachers are dealing with, whether that’s lesson planning, classroom management, or communicating with parents. The goal for most Leadership Fellows is to become an assistant principal and then eventually a principal. To do that, you have to understand what the people you’re managing are experiencing on a day-to-day basis.