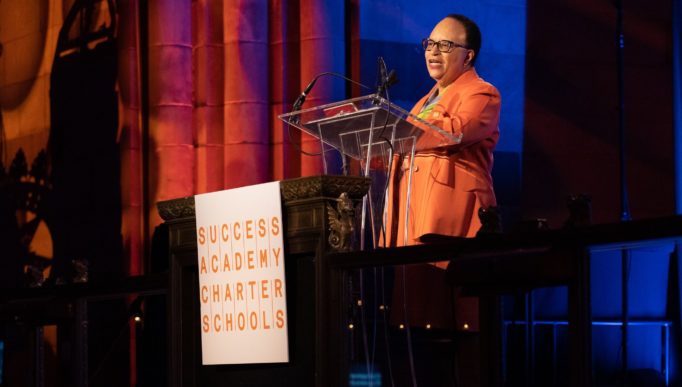 This week, Success Academy friends and supporters gathered at the 2019 Spring Benefit to celebrate and support the “Joy of Discovery” that drives our approach to science, technology, engineering, and math education (STEM). The Honorable Shirley Ann Jackson, Ph.D., president of Rensselaer Polytechnic Institute and recipient of the National Medal of Science, delivered the keynote address, touching on her own experience as the first African-American woman to receive a doctorate from MIT — in any field. Time Magazine has called Dr. Jackson “perhaps the ultimate role model for women in science.”

Dr. Jackson opened her address by saying, “I congratulate Success Academy on the percentage of its students who passed the New York State mathematics and English Language Arts exams. These results should end all debate as to whether academic achievement is determined by race, ethnic origin, or socioeconomic background rather than student scholar motivation and the quality of teaching, rooted in the commitment and vision of teachers and school administrators.” Dr. Jackson, a celebrated STEM leader in a field where women and people of color are extremely underrepresented, reflected on her career path and noted that she defied the guidance of a school advisor who recommended against pursuing a higher degree, telling her that “colored girls should learn a trade.”

Dr. Jackson has been a singularly transformative leader in science, research, and education. She is the 18th president of Rensselaer Polytechnic Institute, driving the university’s cutting-edge approach since 1999. A groundbreaking theoretical physicist, Dr. Jackson holds a bachelor’s degree in physics, and a Ph.D. in theoretical elementary particle physics, both from the Massachusetts Institute of Technology. She holds 54 honorary doctoral degrees.

Before taking the helm at Rensselaer, Dr. Jackson was chair of the U.S. Nuclear Regulatory Commission (NRC) from 1995 to 1999.

In 2014, President Barack Obama appointed Dr. Jackson as co-chair of the President’s Intelligence Advisory Board. She was awarded the W.E.B. Du Bois medal from the Hutchins Center for African and African American Research at Harvard University in 2018. The medal honors those who have made significant contributions to African and African American history and culture, and more broadly, individuals who advocate for intercultural understanding and human rights in an increasingly global and interconnected world.

“The United States has the most knowledge- and technology-intensive economy on earth — dependent on STEM skills and on innovation. Yet we are not succeeding in inspiring the majority of our young people to pursue STEM careers, including, of course, women and underrepresented groups,” said Dr. Jackson said in her remarks. “The world needs bright young people, as many as possible, from all backgrounds to address our greatest challenges: climate change; national and global security; the mitigation of disease and human health; food, water, and energy security for a growing global population. All of these challenges require new science and new technology. To take them in hand, we must inspire our children today to learn that which will allow them to discover and innovate tomorrow. That is why the magnificent performance by Success Academy scholars in mathematics is so important, as is the strong curriculum in science and engineering, English, and other foundational fields.”

Closing her address, Dr. Jackson praised Success’s STEM curriculum and called for greater rigor in K-12 STEM education. “Success Academy, keep changing the world by proving that children from all backgrounds, irrespective of zip code or their country of origin, can achieve great things if someone opens the window and encourages and educates them,” she said. “Indeed everyone who supports this endeavor is changing the world.”