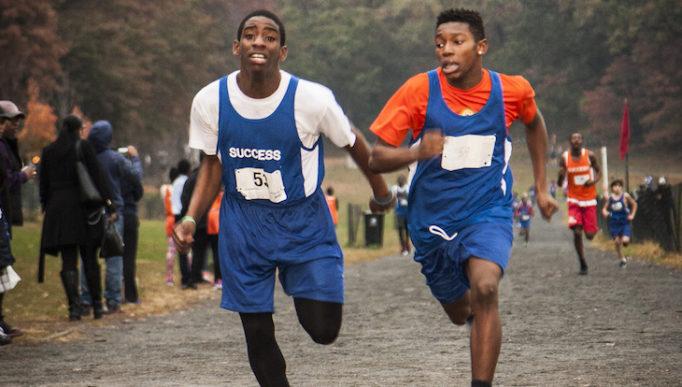 If you passed by Yankee Stadium last month, you might have witnessed two boys running full tilt around the stadium’s perimeter, resistance weights on their legs, leaves crunching beneath their sneakers. Quarell Thomas and Amari Pinkett — both eighth-graders at Success Academy Harlem Central — were preparing for their fall cross-country meets. The two have been friends, and fierce running competitors, for the past three years.

“During my childhood, I was always running,” says Amari. “My mom used to take me out of the stroller, and I used to run. My uncle called me Track Star. Every time he saw me, he’d say, ‘What’s up, Track Star,’ because I used to run everywhere.”

Amari and Quarell are SA Harlem Central’s top runners. The pair have been practicing together since the fifth grade and share a friendly rivalry. “Every time we compete, I motivate myself, thinking, ‘I’m going to beat Amari.’ That’s when physically I start running harder,” says Quarell.

“Sometimes, I will have an off day, and then Quarell will come in first place,” Amari admits. “But I always tell him we are either going to tie or I’m going to beat him, because I always try to get better and better.”

But no matter who wins the race, their friendship finishes first. At one event this fall, Amari tripped and fell. As Quarell passed him, he encouraged Amari to get up. Quarell won the race. “I was a little down because I fell but proud of him that he came in first,” says Amari.

Their time on Success Academy’s cross-country team motivates the two to become not only better athletes but also better students. “Our cross-country group pushes each other to do well in the classroom. Sometimes when we’re fooling around, one of us will say, ‘Come on, bro, let’s calm down,’ because there are finals coming up and we all want to do well and stay on the team. We want college scholarships. Our future is counting on it,” says Amari.

Success Academy Athletic Coordinator Messiah Davis coaches the runners and thinks they have what it takes to earn those scholarships. “They finish a mile-and-a-half race in nine minutes and 36 seconds. I struggle to run that time. There are only about three or four kids that finish under ten minutes,” says Davis. “I always preach effort, effort, effort.” Amari and Quarrell took Davis’s words to heart during another recent race: They each beat their best times by an impressive ten seconds, with Amari leading by inches.

Wherever their futures take them, it’s clear the two make excellent teammates.

“Amari just shows up every day to practice pushing himself and motivating his teammates. He leads by example,” says Davis. “Quarell’s a little more laid back and likes to joke around a bit, but when it’s time to compete, he’s all in. You need to have both types of kids to maintain that balance of a team — some to keep it loose, some to be serious. Together, they’re the perfect teammates.”