We all know the start of the 2020-21 school year posed significant challenges to high school students, including the ongoing pandemic and the continued adjustment to virtual learning. Socializing with friends and avoiding feelings of isolation were not always a possibility — posing another significant challenge.

For Rachel Bochman, a sophomore at HSLA–Manhattan at the time who had just come out to their friends and family, the need to find a community where they could meet other people like them was critical. Without an existing group for them to join, with help from James Hurley, an English teacher at the school, they started their own.

The Gay-Straight Alliance (GSA), dormant in recent years, was revived that semester and has blossomed in the nearly two years since. Bochman, president of the club, welcomes scholars of all ages to meet every Tuesday during the school year.

“We just wanted to provide a safe community,” said the club’s vice president, who prefers to remain anonymous for this blog. “We knew kids wanted to go somewhere after school, but they may not be going somewhere that feels safe.”

The activities in each meeting vary, but after being unable to have meetings at all for a time, coming together this year was an accomplishment itself. With a now-consistent group of members, Bochman has been able to experiment with different themes for each meeting. Last year, Bochman shared their personal experience of coming out. This past year, the discussion was shortened and accompanied by a panel of teachers, who shared their own experiences coming out.

Meeting themes range from serious to fun. Sometimes, the club will dive into the history of queer politics, including pro- and anti-gay legislation. Other times, meetings will revolve around fun activities and games, like Scribblio, Kahoot, and guessing games about the members. Bochman and their vice president are always inviting more people to join, including both allies and LGBTQ scholars. One of their favorite occasions is “bring a freshman or sophomore day” when the younger scholars in the high school get to experience this welcoming after-school community for the first time.

Another favorite of Bochman’s is talking about LGBTQ artists and celebrities who members may not have known about, like Frédéric Chopin or Queen Latifah. No matter what they do during a meeting, they make sure every member is comfortable. Cultivating an area that is safe and inviting is not only important to Bochman and the leaders of the club, it’s required.

That’s why they’ve developed ways to cover subjects respectfully, considering each of the following phrases before broaching a topic in a meeting: confidentiality, respect, attentiveness, be open, and assumptions. In addition, members have to be careful about not sharing GSA documents and other information, including where members and other scholars are in terms of their sexuality and gender identity.

“We’re doing it!” Bochman said. “We’re sometimes the only group that our members can go to, but we’ve accomplished our goal of creating a safe space.” 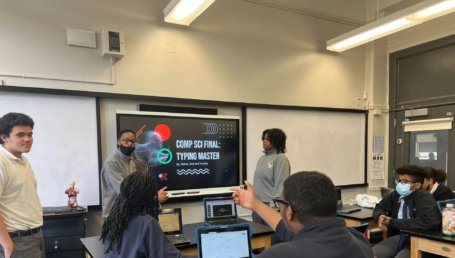