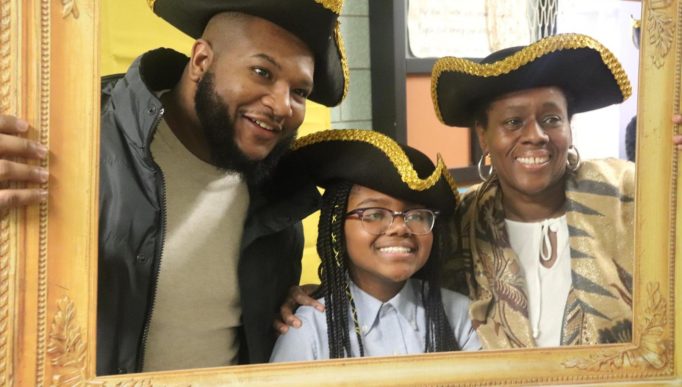 It might be possible to find a museum or exhibit in New York City that allows you to investigate original scientific research, test out Rube Goldberg machines, or observe historical reenactments all on one visit. It might be possible — but you are more likely to find this kind of learning adventure at your nearest Success Academy middle school.

Every December, our middle schools host the highly anticipated Academics Showcases. These events are the culmination of weeks of intense academic preparation, entirely led by scholars. In the Science Exploratorium component, scholars craft their own scientific hypothesis, design an experiment to test it, identify and order the materials needed, and record their results. In the Humanities Museum, they dive into research reports across four units and put creative thinking caps on to bring history to life in end-of-unit projects.

The Academics Showcases shine the spotlight on scholar work, providing family members with an all-access pass to explore the learning taking place in our classrooms. Nearly 3,500 middle schoolers participated in this year’s Showcases, most accompanied by at least one family member eager to see firsthand what scholars have been exploring, building, writing, and discussing. The Showcases celebrated excellent learning, while simultaneously allowing families to engage with their own scholars’ work, see what kind of lessons to expect in future years, and appreciate the public speaking abilities of the confident young presenters.

Brittany Sider, associate director of middle school science, and Ezra Plancon, manager of history, are two key people who work behind the scenes to ensure Showcase success. Both oversaw multiple Showcases across the network. We caught up with Brittany and Ezra to discuss their perspectives on this year’s events — and to hear about how Academics Showcases help scholars and families become even more excited about the learning taking place in our classrooms.

What stood out to you as a major achievement for this year’s Showcases?

Brittany: This year, the quality of the family experience was better than ever — every single guest was invested and involved. Parents weren’t simply standing there, they were engaged with their own scholar’s project and also with the class as a whole. I even saw some tears of pride! It was evidence of well-organized events, but also the fact that our scholars were confident, invested in their projects, and prepared enough to teach about what they’d learned in an exciting and professional way. Schools also were thoughtful about how to involve families, with some even handing out rubrics and allowing parents to act as teachers for the day.

Ezra: The stand-out for me was also the community aspect. Schools used the Showcase as an opportunity to further build strong school-family relationships. It was clear that a lot of work went into getting the scholars excited to present to a wider community, and vice-versa; the families who attended had been communicated to in a way that built their investment. Everyone was celebrating the fact that the scholars had pushed themselves academically, and that they could think and act like professional academics. What was your favorite experience from this year’s Showcases?

Brittany: Mine might come as a surprise because it involved providing some rather critical feedback to a group. The project they designed involved examining how different chemicals create different colored flames. I challenged them — wasn’t this something that is already known to scientists? What unfolded was the kind of discussion that shows the level of critical thinking we’re striving for at Success, which the Showcases help facilitate. The scholars came to their own conclusion: there are known theories and facts, and it doesn’t make sense to spend resources on an experiment that has been done before. They discussed what they would do differently so that their research could be more helpful for other scientists. It was great to see how responsive they were to the feedback and to be able to engage in an academic conversation on the spot.

Ezra: I was blown away by the eighth-grade Showcase at Midtown West. They have a very small class, which means it could have felt like the opposite of a big deal — just a few parents in a classroom with their kids. Instead, they made the experience feel like a conference, providing clipboards with rubrics and summaries of the projects. The scholars were given timed slots to present in front of peers and parents. I found it exciting because there was the feeling that the work mattered, and that the scholars realized how their learning can impact someone in front of them — the audience either learns something, or doesn’t.

What role do these events play in scholar learning?

Brittany: We’re focused on making sure our scholars are really growing as scientists — so they can take concepts that they’ve learned and apply them to new phenomena, articulate how they’ve designed an experiment, and talk about how they would change the approach. The Showcase is future-focused. Scholars aren’t going to persist in college if they don’t learn how to engage with other people studying their subject, or have academic conversations with professors in a way that advances understanding. The Showcases expose scholars to essential collegiate skills.

Ezra: The presentation element for humanities is really significant, especially in terms of moving scholars as readers and writers. Writing is challenging, and often our scholars have to digest a lot of feedback on a daily basis and try to do it better. That becomes an easier task once you realize that your writing is really your voice, and that your voice has worth and is a tool to communicate ideas. Academics Showcase is a chance to do that, because the scholars realize that somebody else is reading besides the teacher. This is a chance for scholars to feel the intrinsic worth of their work.