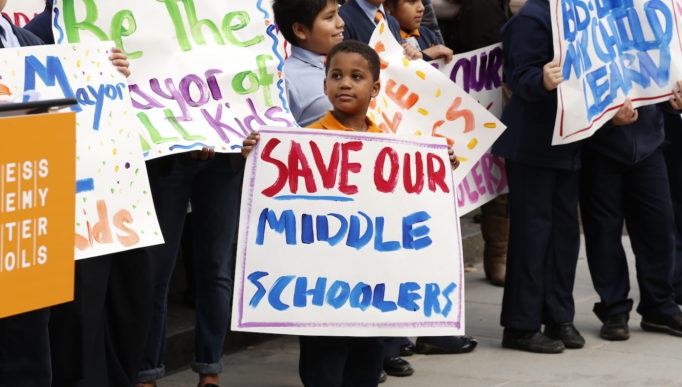 The city’s proposal to temporarily house Success Academy middle school students from five Brooklyn elementary schools in just two locations is not “reasonable, adequate, or comparable.” In fact, the proposal is an aggressive affront to families, many of whom had believed the Department of Education last year when it promised to find a permanent site for their children’s middle school.

By the DOE’s own account, these two proposed locations provide neither permanent nor adequate space for all grades of middle school:

In fact, your plan would force many of these children to change school locations three times over the course of their four years of middle school. The 1,000 seats will not accommodate the 1,400 to 1,700 students who will matriculate from the five elementary schools. These children need a school for their entire middle school term — not just for one or two years.

Therefore, we must reject your proposal and respectfully insist that our families and children receive the same serious consideration due to all New York City schoolchildren. The Success Academy students enrolled in these five elementary schools need three schools, with a minimum of 24 classrooms in each school. Two locations/buildings are not adequate to serve 1,700 students in grades 5 through 8. By providing the bare minimum of space for a temporary location, your administration sends the message to our families that they don’t deserve a permanent school. When the city opens a new district school, it plans for full enrollment, which is all we are asking for our Success schools.

With the abundance of underutilized space in the city’s public school buildings — and the extraordinary amount of time your administration has taken to finalize a plan for these children — it’s unfathomable that you would deny them seats and literally deny them a future by providing for only two years of their middle school experience. It’s not only inconvenient and disruptive to families; it’s harmful to children.

As mayor of the largest and most economically divided city in the country, you should feel a responsibility to embrace all children, regardless of what school their parents have chosen for them. Would your administration propose opening a district middle school without enough seats for students to complete all four grades? Would you expect district school parents to send their children to a new school, knowing that lack of space would force them to move after two years?

Of course not. Charter school families deserve no less.

Adequate space in Brooklyn’s public school buildings exists for these children, as the DOE’s latest update of the Blue Book shows. There is reasonable, adequate, and comparable space in SA Cobble Hill’s district 15 and in SA Williamsburg’s district 14. Space enough for grades 5 through 8, space enough for children to learn and grow through four years of middle school, space enough to feel safe and secure for all four years of middle school, space enough to make and keep friends for all four years. A few examples from the DOE’s most recent Blue Book:

Enrollments at many of the schools in these buildings have been shrinking for years, a common consequence for low-performing schools. Instead of protecting empty buildings and blockading children from using empty classrooms, a fair-minded mayor would do what’s best for all students and support all high-quality schools — whether district or charter.

Withholding seats and robbing kids of classroom space supports neither equity nor excellence. Our city government needs to do all it can — use every available resource — to help children achieve and improve the quality of our public schools. Success Academy and other public charter schools are ready to do our part, to increase access for all learners, to help meet the demand from parents for excellent schools. But we need a mayor who can partner with us, who can put children first and share public space fairly.

Mayor de Blasio, after almost six months of waiting, parents are understandably frustrated and want to know where their children will attend middle school next year. With only a few weeks until the December 2 deadline (to be on the Panel for Educational Policy January meeting agenda), we urge you to direct the DOE to find a new path forward, a proposal that includes three separate locations and is comparable with what the city would provide district school families — with enough space for children to complete all four years of middle school.