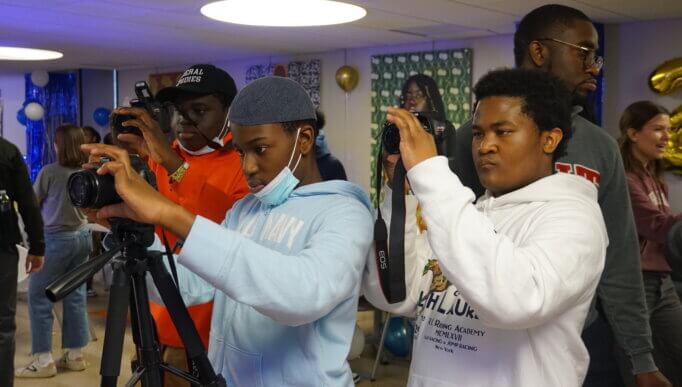 Can photography help us become better people? Rasheed Williams, photography teacher at Success Academy High School of the Liberal Arts—Manhattan, is passionate about the answer. That’s why he created Studio Squad, the school’s first-ever photography club, which encourages scholars to not only embrace their creative side but also their leadership skills.

Created for all experience levels, the group is now one of SA HSLA–Manhattan’s most popular, growing to over 40 scholars in less than a year. Studio Squad’s members serve as the official photographers at all school events, including Homecoming, Hispanic Heritage Month, sports games, and more. The group also ensures that as many special moments as possible are captured every day — from friendly interactions in the hallway to the changing sunlight in the school’s windows. “There’s nothing we don’t do,” Mr. Williams said. “The way I see it, the more gigs the better. I want them to get as much experience and practice as possible, so if a scholar wants to jump on an opportunity, they can.”

Weekly Studio Squad meetings take on a variety of shapes and forms, from collaborative workshops to feedback sessions to planning discussions for their next school-wide event. But teaching scholars how to frame the perfect moment isn’t all that Mr. Williams aims to achieve in the club. This year, he established a leadership council to promote peer mentorship and responsibility within the group. To earn a spot on the leadership council, scholars must exhibit a passion for photography and high levels of accountability. Mr. Williams has been impressed at how the council has stepped up with new responsibilities, which include working closely with younger club members on camera tips and tricks.

“Teaching other students how to interact with the camera is so rewarding,” said junior co-captain Joseph Leiva. “All of us love to learn, so it’s cool to have the chance to pass some of my knowledge on to the younger scholars.” The younger scholars have proudly deemed the group a “safe space” to learn and grow. “From my very first meeting, everyone has been very nice to me,” freshman member Niquel Way said. “That’s just really comforting. Even if members are in higher grades than you, you can still interact with them equally. I’ve just felt so accepted. I feel like that environment has helped me grow even more.”

Another one of Mr. Williams’ goals this year is to provide his scholars with access to opportunities outside of Success Academy, so they can practice, learn, and build their portfolios. He frequently provides them with information about nearby gallery events and encourages them to take photos in their daily life outside of school. The group will soon be expanding into the print world, as Studio Squad will be responsible for taking and curating photos for the first-ever SA HSLA–Manhattan school newspaper, which is expected to release in January. Upholding its tradition of leadership, the school will join just 27 percent of New York City high schools that have a newspaper.

“Photography can help people become more confident, creative, and even learn more about themselves. If I can help people do that through this club, then I have achieved my goal,” Mr. Williams said. Middle School Friendships – The Inside Scoop

Calling all Success Academy fourth graders! Curious about what middle school has in store for you? We got to chat with two of our amazing middle school Ambassadors, SA Midtown West eighth grader Mital... Read more A Statement from Founder and CEO, Eva Moskowitz At Success Academy, we have a powerful approach to anti-racism and DEI that most organizations do not have available to them. Most other organizations h... Read more I Was Nervous About Middle School. Here’s Why I Didn’t Need to Be

On my first day of fifth grade at Success Academy Midtown West Middle School, I was nervous. Really nervous! I loved elementary school and, by the end of fourth grade, I knew what to expect each day a... Read more