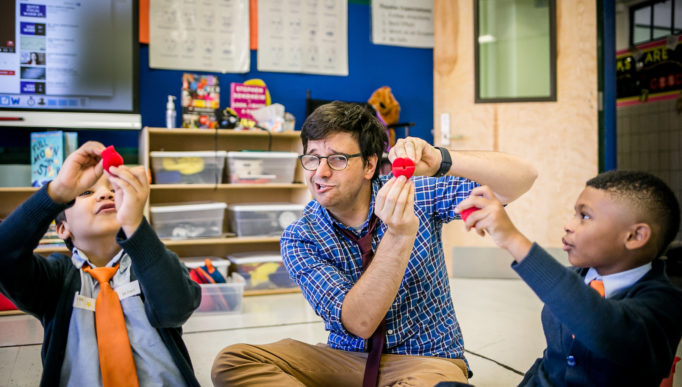 It’s often said that teachers wear many hats throughout their careers. In May, that saying took on a very personal meaning when we were told that our school, SA Lafayette Middle School, would likely not be allowed to open because of a bureaucratic technicality. I was determined to fight for our kids, so I spent the past few months growing not only as an educator and as an artist, but also as an activist and advocate.

When we realized that we were not going to win the right to our own building — in spite of a petition with more than 6,000 signatures — I knew I couldn’t take off my activist hat. Our scholars are going to have to continue fighting for their own space in a crowded world, and I see theater as a powerful tool to help them do that effectively. I therefore went into summer T-School with a renewed sense of mission; I want to equip my scholars with the skills and confidence to turn any place into a stage. Whether they are performing in a hallway, a classroom, or even a former storage closet, they will raise their voices in the face of forces and systems that might attempt to silence them.

Our scholars are going to have to continue fighting for their own space in a crowded world, and I see theater as a powerful tool to help them do that effectively.

On the surface, this summer seemed like any other: Success Academy teachers immersed in comprehensive training in order to return to our classrooms with the most up-to-date expertise. I always enjoy this opportunity to get back to studying the art — the art of teaching and the art of performance — while also fine-tuning my theater curriculum. This year, my learning priorities were profoundly shaped by what our community was going through. If we had been allowed to start the year in the building the city originally sited for us, I would have had my own classroom complete with a lighting rig, transformable stage, and speaker system — our very own black box theater. Now I won’t have my own classroom or space for these resources, but it’s up to me to make sure scholars continue growing as learners, and performers, no matter the physical space. I therefore spent the summer immersed in classes that embrace this perspective. From an improv class at the Magnet Theater to an educators’ workshop at The New Victory Theater, I practiced the art of putting on a show in any kind of setting or situation. I also pored over works by Odets, Miller, and Grotowski about theater movements that doubled as acts of protest, contemplating ways that SA teachers, scholars, and parents can continue to stand united and express ourselves as an educational community that has every right to exist.

I’m looking forward to our first in-class theater piece, a dance based on One Last Word, by Nikki Grimes, the book that every member of the SA community read over the summer as part of our One Network, One Book initiative. This remarkable collection of poetry draws on visionaries and artists from the Harlem Renaissance for inspiration. In addition to the apt subject matter — after all, the Harlem Renaissance exemplifies this concept of claiming space for self-expression and marginalized voices — I love the idea of basing our first interpretive work on material that connects us to the entire SA community. The performance should be a striking example of what can unfold in a single classroom, with thirty students moving in a small space yet nevertheless creating human expressions that are beautiful, meaningful, and connected to a very powerful piece of literature.

I have first day jitters just like always. But I’ll never forget the advice of one of my former acting coaches. In his class, he emphasized the need for intensive preparation before a performance. You need to prepare so thoroughly, he said, because “the moment you’re up on stage, you can only hope to hold on to a tenth of the preparation. When you’re performing, you’ll need to listen and you’ll need to react.”

I have spent the summer doing the intensive prep-work needed to make sure I can immerse my scholars in meaningful learning right from the start. But I know there will be unexpected challenges that require in-the-moment reactions and adaptations. I’m not worried; everyone at Success Academy Lafayette has already proven that we can quickly rise to meet an unforeseen obstacle. In the coming year, we will don any hat that is demanded of us and work together to establish SA Lafayette as a resourceful, resilient community that is empowered to make its voice heard.