It’s not easy to ignore our scholars. First, they are adorable, and second, if you take the time to listen to them, they have the most amazing things to say. But Mayor de Blasio doesn’t want to see our Queens fourth graders. He wants to pretend they don’t exist, that they don’t need a middle school, that their futures don’t matter. Cynical? Yes.

There are 227 fourth-grade scholars at risk of having to leave the Success Academy school system that they love, that their parents have chosen for them — simply because Mayor de Blasio has not designated an adequate space (out of the many available) for them to learn. After waiting three years, these scholars and their families recently learned that the building Mayor de Blasio had proposed was grossly inadequate.

Ask their parents and they will tell you just how hard this has been for their children. Their kids don’t understand — they’re sad, confused, and angry. They don’t know where they will go to school next year, whether they can continue with Success or not. Below are some of the scholars whose education is at stake. 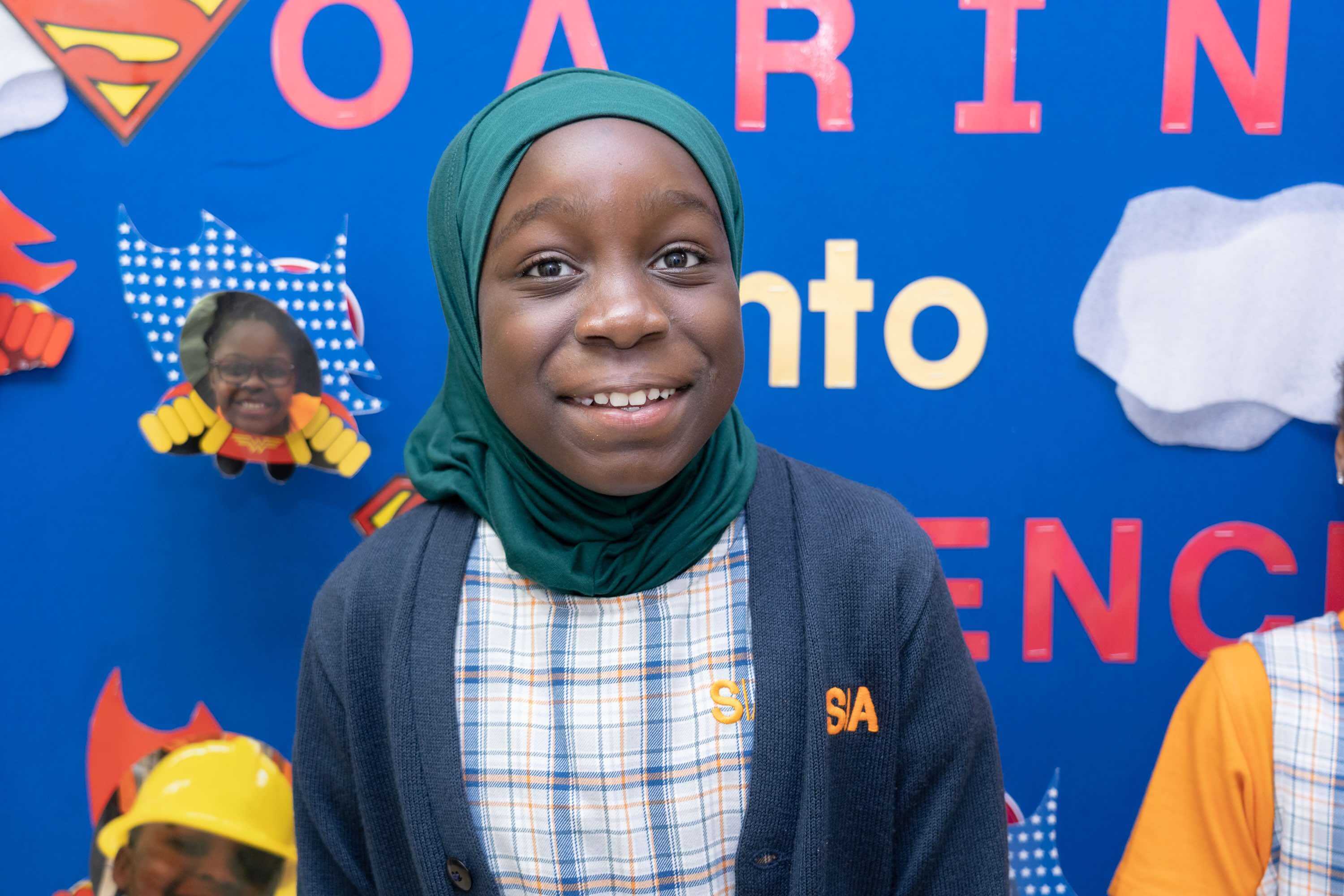 Nine-year-old Mariam Jimoh just started fourth grade as a new student at Success Academy Rosedale this year, and for the first time in her young life, she feels academically challenged. Mariam was always ahead of the curve, but this year she has found pleasure in pushing herself to reach new heights — stretching to a new reading level benchmark and mastering new math concepts. Mariam was at City Hall the day Mayor de Blasio ignored the 200 Success Academy students who had come to plead for space to learn. “I was really surprised, and I was a bit mad when he just walked past,” she recalled. “I thought he was going to stop and take into consideration the kids who need a school.”

“I thought he was going to stop and take into consideration the kids who need a school.”

One new discovery is a love of dance, an elective she chose this year. “Dance is a way to be free and do some exercise and move my body,” she said. “It’s nice to dance during the day to mix things up — it’s a different type of learning.” Elijah Gilkes used to be bored in school — until he won a place to attend Success Academy Rosedale. Now in his second year at Success, he never has a dull moment. When he’s not investigating algorithms in his favorite math class, Elijah’s cultivating his strategic thinking in chess. His best move? The Rook Roller, a checkmate using two rooks. His goal is to make it into the top three players at his school.

“Being a Success Academy scholar makes me feel proud because I get to challenge myself in the things I love, like math and reading and chess,” Elijah said. “That’s why I want to stay here.” Every morning, Maliyah Salkey walks her siblings, Kydon and Malani, to their kindergarten and second grade classrooms before heading upstairs to her own. Not only does she make sure they are on time, she looks after them to make sure they are doing the right thing in class. In addition to being the most protective big sister at Success Academy Springfield Gardens, Maliyah is well loved by school staff for the positive energy she brings into the school each morning and the hard work she puts in on anything asked of her. Last month, Maliyah was presented with the Best Effort Award at the school’s Community Circle event for her persistence on a recent English project.

In addition to being the most protective big sister at Success Academy Springfield Gardens, Maliyah is well loved by school staff for the positive energy she brings Mekhi Creighton is Success Academy Springfield Gardens’ reigning math bee champion. He snagged first place this year after coming in second in the 2018 competition. This year’s winning math bee question required him to add two three-digit numbers in 10 seconds or less. “Math is my favorite subject, because the numbers have relationships and you can use them to get to the answers in different ways,” said Mekhi. “I like going to a school that has math bees and teaches us difficult math concepts.”

In addition to exercising his quantitative chops, Mekhi serves as an assistant choreographer to SA SG’s dance teacher, Mr. Rousell. A performer through and through, Mekhi has been the star of many productions at SA Springfield Gardens, including the Black History Month open mic night and the winter and spring dance showcases. In his spare time, Mekhi competes on the SA SG basketball team.

“My sister goes to Success Academy Queens 1 Middle School. I want to have the same opportunities that she has,” said Mekhi. Maya Inniss thinks she might want to be an art teacher when she grows up. This comes as no surprise to her teachers at Success Academy Far Rockaway, who know her as an extremely hard worker who is always looking for ways to help her classmates. But now, Maya’s the one who could use help in convincing Mayor de Blasio to let her continue her education at Success Academy.

Maya loves school and excels in classes that allow her to immerse herself in hands-on and creative projects. Her chosen electives, art and dance, allow her to express herself through movement and her artistic medium of the day. “I like to blend colors together,” she said of her creative process. But when asked to pick her favorite class, she said, “Science! I love to do experiments, like the one we did with Mentos and Diet Coke.” Pearl Paul is poised beyond her years, her unflappable confidence always on display as she speaks in the classroom. Her principal, Jose Rosario, says she has already mastered the firm handshake, as displayed each morning when she greets him at the door at Success Academy Far Rockaway.

When she is not dazzling her teachers in the classroom, you can find her on the court as a member of SA Far Rockaway’s basketball team. She’s got big plans for her future – she wants to become a doctor or a biologist after college. Pearl was at City Hall the day Mayor de Blasio ignored the 200 Success Academy students who had come to plead for space to learn.

“I’m disappointed because I’ve been in this school for four years,” said Pearl. “We’ve already built a great foundation and I want to continue here. We don’t want to leave.”

We don’t want to leave. Bryanna Harrison believes hard work is its own reward — her teachers at Success Academy South Jamaica love that she always gives 100 percent effort to the task at hand. She enjoys challenging herself and taking pride in everything she does — whether that’s playing basketball, expressing herself through art, or discovering chemical reactions in science lab. She’s funny and compassionate, always noticing when someone is upset and offering a shoulder to lean on until they feel better.

“I think that Mayor de Blasio is being unfair. Success Academy is a nice school that pushes us to our limits! He is being unreasonable and stopping scholars when they still have so much to learn!” said Bryanna. Ayden Brotherson knows exactly what to do when a friend needs help: lend a hand! This Success Academy South Jamaica scholar excels in math, ELA, science, and sports, but he’s especially good at encouraging and supporting others. Success Academy has proven a perfect fit for Ayden, whose team-oriented mindset has made him a favorite of coaches, teachers, and other scholars at his school. He’s shaping up to be a leader in the classroom and on the basketball court — but his academic future is in jeopardy.