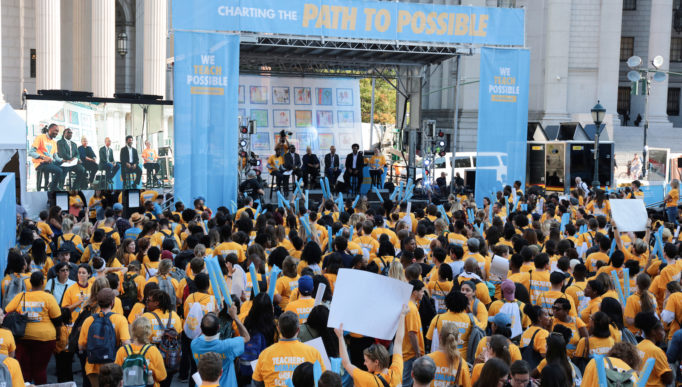 On Saturday, the NAACP, arguably the nation’s most influential and long standing civil rights organization, approved a moratorium on public charter schools. It is unfathomable to me that an organization bent on the “advancement of colored peoples” is trying to halt and  dismantle a movement working to reverse the instructional and achievement gaps for brown and black children in public school education throughout the country.

I am a proud African-American man and the principal of a charter school in Harlem. Virtually all of the students in my school are black and brown, so I know firsthand the impact that charter schools have on the lives of these children. At my school, 91% of our students are proficient in math and 75% are proficient in English. If these students weren’t attending my school, most would be attending district schools in the neighborhood where, sadly, their chances of success would be severely diminished. Last year, only 17% of the elementary school students in Central Harlem district schools scored proficient in math and only 21% scored proficient in English.

There are currently more than 44,000 children in New York City alone who are stuck on waiting lists to get into charter schools like the one I run. The NAACP, however, by calling for a moratorium on the creation of new charter schools, would trap children, particularly children of color, in failing schools. Shutting the schoolhouse door on them is no less wrong or damaging then when Orville Faubus sought to bar the schoolhouse door on African-Americans who were stuck in substandard segregated schools in Little Rock, Arkansas.

The NAACP, however, by calling for a moratorium on the creation of new charter schools, would trap children, particularly children of color, in failing schools.

Language in the NAACP’s resolution comes directly from the union playbook, replete with previously debunked myths about public charter schooling. The most outlandish —  that charter schools should be “subject to the same transparency and accountability standards as public schools” — is laughable. While outliers exist, charters are highly accountable. In New York and other states, charter schools are reviewed by their authorizer every five years and must pass rigorous academic and financial review; failure to meet these standards results in closure. For failing district schools, no such accountability exists.

Last year, the NAACP spread the lie that charter schools are a schoolhouse to prison pipeline because some charter schools choose to expect higher levels of discipline from our students. This is nonsense. The evidence is clear: One of the biggest impacts about whether a child will end up in prison is whether or not s/he gets an adequate education. Nothing is more harmful to a child than continued promotion through the school system without making sure that he has learned what he needs to succeed as an adult. I know that the children in my school will not end up in prison because they will have the academic tools needed to succeed in life.

Why the attack on public charter schools and parent choice? Sadly, it is because the NAACP has entered into an unholy alliance with unions who are opposed to charter schools — not because they harm kids, but because they diminish the stranglehold of teachers unions over American public school education, in which the interests of union bosses are often put above the interests of children. Money and political favors are changing hands, with the NAACP fetching a pretty penny as the hired gun.

Nothing better demonstrated this alliance than the wrongheaded lawsuit that the New York branch of the NAACP and the United Federation of Teachers brought in 2011 to prevent nearly two dozen charter schools from opening — and to keep 22 abysmally failing district schools open. In defending that lawsuit, Hazel Dukes, the local NAACP head, told a parent of color that by supporting the charter school to which she sent her child, she was “doing the business of slave masters.” In fact, the opposite is true. It is the NAACP which is doing the bidding of unions and forcing kids to accept inferior futures.

Those of us who are actually on the ground at charter schools in Harlem and other urban neighborhoods across our country know how much charter schools are doing for children of color, and how wrong the NAACP is to take its position. After the smoke clears, history will show the NAACP to be an enemy to education reform and the empowerment of brown and black children. We should call its attempt to impose a moratorium on charter schools what it really is: black on black crime.