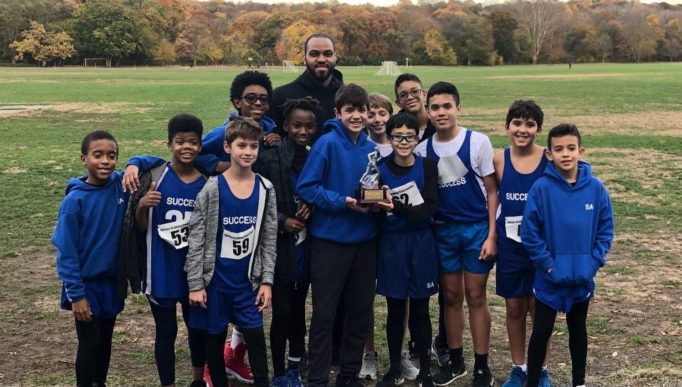 When my SA Midtown West cross country scholars gathered at Pier 84 on the first really cold day of fall, I knew that this was going to be a challenging practice. The wind was raging, the scholars were just returning from a week-long break, and everyone was still a little sleepy. I also knew that this team — a mixture of returning runners and eager first-timers — could absolutely rise to the challenge.

They’d been doing that since day one of the season, when we set the goal of becoming the network champions for a second year in a row. The competition was fierce. Cross country is a popular middle school choice, with teams offered at every SA middle school across the network. Many SA scholars have been running since elementary school, and many of them are outstanding athletes across multiple sports. But my team — and I know I’m probably a little biased — is really outstanding. Neither the pressure of defending the boys’ title, nor the intimidation of being a newly-established girls team, got in the way of their focus, their determination, and their complete commitment to a try-and-try mindset.

Take one of my newest runners, 6th grader Lila Wetzel. She joined the team without really knowing what to expect — she’d watched her brother compete in years past but wasn’t sure if she was going to take to it herself. From the first practice, she brought an energy and a motivation to the group that I really appreciated. It’s always scary to try something new, especially when that something is as challenging as running, but she didn’t hold anything back. On her very first race she placed third out of the entire network, and I knew we had a rising star in our midst! She tells me that running helps her feel good because she knows that she can handle any challenges for the rest of the day after she’s finished a difficult morning practice. Lila and the rest of the girls majorly contributed to team-building by using each other in races to push for faster times and to make sure everyone was having fun, even as they were working hard.

My team captains, seventh grader Dawson Carlisle and eighth grader Ethan Wetzel, helped me create what is basically a cross country family. They set an example for the others to follow, and I think are a large part of why this particular group was so motivated. My runners even committed to practicing over breaks, and sent me photos of themselves running! Ethan and Dawson always lead the stretches and the drills, and I think it’s inspiring for some of the newer runners to see the friendships they formed through the sport, as well as their focus every day at practice. That’s really my priority for our team: Having fun and helping scholars become passionate about sports. Running is an extremely challenging sport, and my scholars learned that not every run is going to go as smoothly as they envisioned. As a coach, I made it my primary goal this year to make sure that they learned to enjoy the rewards of giving it your all, together as a team and as an individual performer. The approach paid off! I had the incredible joy of watching my boys’ team win the championship again this year, and to cheer for our girls as they fought for second place. While not all our scholars achieved their goals, we certainly learned a lot on the journey to the finish line. I can’t wait for another season.