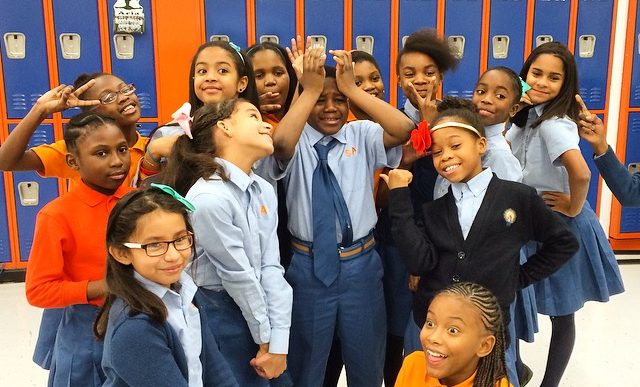 As the theatre arts teacher at two Success Academy middle schools, I teach fourth-, fifth- and sixth-graders how to project their voices, enunciate their words, stand and move with confidence, create interesting characters and love the complex worlds that playwrights and actors can conjure. They love the challenge and the creativity of acting. But what is an actor without an audience? That’s why we are putting on a show – the first-ever Success Academy middle school musical, “You’re a Good Man, Charlie Brown.”

The production will not only be an opportunity for our scholars to demonstrate their enormous talent; it will also encompass our network’s action values, create joy, and bring our community together. And, because “You’re a Good Man, Charlie Brown” portrays the essence of being a kid – getting along with a sibling, not turning homework in on time, feeling alone, finding happiness within oneself — our scholars are able to identify with the characters and portray them in an honest and profound way.

The production will not only be an opportunity for our scholars to demonstrate their enormous talent; it will also encompass our network’s action values, create joy, and bring our community together.

When I held auditions, along with my music teacher colleague and T-School friend Amanda Jones, no fewer than 70 scholars showed up. I knew we were going to have a very special show on our hands. We heard wonderful audition monologues and songs, including 30 different renditions of “Let it Go” from Frozen. The ambition and drive our scholars displayed was amazing. But, as in the real world, we could accept only 25 actors from both schools into the show. When the scholars showed up to audition, we knew we had a huge decision to make; the talent was overwhelming.

On the day the cast was to be announced, one particularly talented sixth-grader at Harlem North West, Quincy, marched around the halls with his head held high, stating matter-of-factly, “I’m going to be Charlie Brown.” When asked how he knew, he confidently replied, “Because I just know.”

Quincy had come into the audition room like a seasoned professional. He sang his own remix of Lorde’s “Royals” and recited a Charlie Brown monologue like he’d been speaking those lines for years. Ms. Jones and I looked at each other and nodded our heads. Quincy, too, could feel the magic in the room – he truly understood the character of Charlie Brown. He understood his pain and his happiness, his wants and his obstacles. Quincy got the part. Wait until you see him!

Other students were anxious on the day of the auditions. Fifth-grader Niyah-Nicole later told me: “It was nerve-wracking to go into the room. I was afraid I was going to mess up. But I didn’t mess up — you have to be confident, you know?” Niyah-Nicole made the cut and now she has more confidence in herself.

The task ahead is enormous. We have 2½ months until the show opens. We have 25 scholars from two schools who must memorize lines, lyrics, and blocking. We have costumes, lights, sets, and sound to organize. However, our scholars have the grit, determination and talent to make this a spectacular theatrical experience.

My next blog post will describe our rehearsals and how our scholars are honing their craft as actors and growing into their parts. Meanwhile, mark your calendars for 7 p.m. Friday, March 20 and Saturday, March 21 at SA Harlem North Central. We can’t wait to share our work with you!