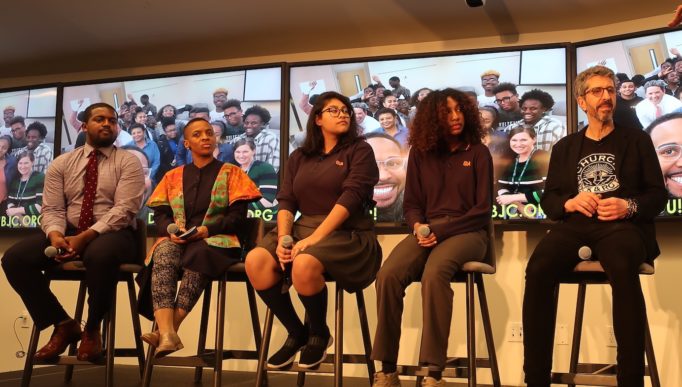 What Kids Need From Adults To Thrive

Navigating 2019 as a child is tough. For kids with marginalized identities, it’s even tougher. Last month, educators, parents, and community members gathered at the Robertson Center for a special conversation on supporting kids with diverse identities as they figure out who they are and who they want to be.

To answer this, Johns turned to Evelyn Knapp and Naomi Eyre, two panelists at the event and students at Success Academy High School of the Liberal Arts.

“Being a high school student is really hard,” Eyre said. “We’re so vulnerable, and there’s so much pressure every day. We need adults to really pay attention to how kids are acting every day and notice when something seems off. We need them to show us that they care.”

Johns nodded as she spoke — this sentiment was not new to him. In his former role as Executive Director of the White House Initiative on Educational Excellence for African Americans, he had asked the same question of countless students. The most common answer was the same one at the heart of Eyre’s response: To thrive, kids need love, especially when it’s inconvenient.

“It’s not possible to love our babies enough,” Johns said. “Think about what it means to show up in a world that tells you, in so many ways, that you shouldn’t show up as you are, that who you are is not worthy of love.”

Eyre, Knapp, and so many of their peers know that feeling well. Their identities — black, Latinx, LGBTQ — come too often with the burden of low expectations, limited supports, and the outcomes produced by both.

“When we don’t do the work of affirming and supporting all of our babies, there are consequences not just for our children but for our country,” Johns said.

Attuned to these consequences, the remaining panelists shared their perspectives on how to get ahead of them. Aaron Marcus, a second grade teacher at Success Academy Harlem 5, talked about the work he and his colleagues have done to celebrate who their students are as people. “We want them to feel empowered to create change, to look at what they see on the news and say, ‘I’m more than that,’” he said.

DeeArah Wright, Director of Education at the Brooklyn Children’s Museum, talked about the importance of exposing your vulnerability to kids and modeling for them how to be curious, collaborative, and learn from mistakes. “When they watch you opening up and being vulnerable, they learn to feel that it’s okay for them to do that, too,” she said.

And Jason Flom, CEO of Lava Media, criminal justice reform advocate, and children’s book author, talked about his family — his daughter identifies as LGBTQ and his brother has learning disabilities — and what their experiences have taught him about love and affirmation.

“It’s like Albert Einstein said: Everyone is a genius,” Flom said. “Kids just need to be given the encouragement and support to be who they are so they can express that genius in their own way.”

According to Knapp, when adults take actions like these, kids notice.

“I had one history teacher, she was hard on us, but she was really there for us every time we needed her,” she said. “She was strict because she wanted us to succeed, but she was also so funny, she gave us words of wisdom, she showed us she cared about us. I’ve never forgotten that.”

To close, Johns asked panelists to share their one request for event attendees. Responses ranged from committing to validating the kids in your life every day to being more relaxed and having more fun with kids, and challenged attendees to reflect on their own capacity for impact.

“The real work is going to happen after this event, when other people are so uncomfortable about the possibility of equity existing that they try to derail the work,” Johns said. “We can’t allow that to happen. We have to believe that every child can thrive and stay committed to that vision no matter what.”

Success Academy reopened its doors to scholars across the city in August, safely ushering students back into the classroom after an unprecedented 2020-21 school year. To keep our scholars safe — and learning — it’s more important than ever that we work together with families and guardians to ensure everyone in our community is on... Read more

Back to Basics: 3 Ways Parents Can Help Scholars Adjust to In-Person Learning

The school year is well underway, and it is so exciting to be together again in our classrooms. We love seeing scholars connect face-to-face and participate in hands-on science labs, team sports, and theatre productions alike. Nevertheless, we know returning to a new or unfamiliar learning space can be a challenging transition, and scholars might... Read more

Our Commitment to Diversity, Equity, and Inclusion

The deadly pandemic that forced children to isolate and learn remotely has only deepened painful issues of inequity. All around us, there is profound learning loss and lack of access to equitable resources. At Success Academy, we have a special obligation to get back on track and ensure that our students realize their full potential,... Read more