We often think of art class as a place where you just learn how to mix colors or use a paintbrush, but in SA art classrooms, teachers know it’s so much more. Across our schools, they design projects that teach our scholars that art is a dynamic, living, breathing way to challenge our perspectives and to change the world. Here are just a few that have inspired us and our scholars. Jamaican Sunshine. Cocoa Puff. Chocolate Waterfall. Brown Pop. These are the names Crown Heights K-4 scholars gave to their own skin during a unit led by art teacher Meredith McDevitt, whose  background in art education and social justice from NYU paved the way for this project.

“I’ve dedicated my studies and my life to thinking of kids as visionaries and using art to reimagine a better world,” Ms. McDevitt said. “Most of my kids are black or brown students, and so the traditional projects for Black History Month, like analyzing a portrait of Martin Luther King Jr., just didn’t seem personal enough. I wanted to be open with kids about race and racism, their own experiences, and how contemporary artists are addressing that theme and identity as well.”

So McDevitt adapted a project she credits to another art teacher, Sarah Mallory from SA Cobble Hill, for students. She asked kids to critically analyze art-making supplies that were intended to be representative of skin color — like Crayola skin tone markers or even products they used in the classroom, such as Band-Aids. “They discovered that most of the skin tones didn’t match theirs. But each and every one of my kids is so beautiful and deserves to be represented in art! So I asked them to mix paint to match their own skin tones and name it something fabulous. They had such a blast taking ownership and celebrating themselves,” she said.

McDevitt’s scholars used the paint they mixed for the remainder of the unit. Then, they wrote poems and letters to Crayola and Band-Aid. These colors don’t match me or my friends, they’d write. Please consider using real people as models for your products. 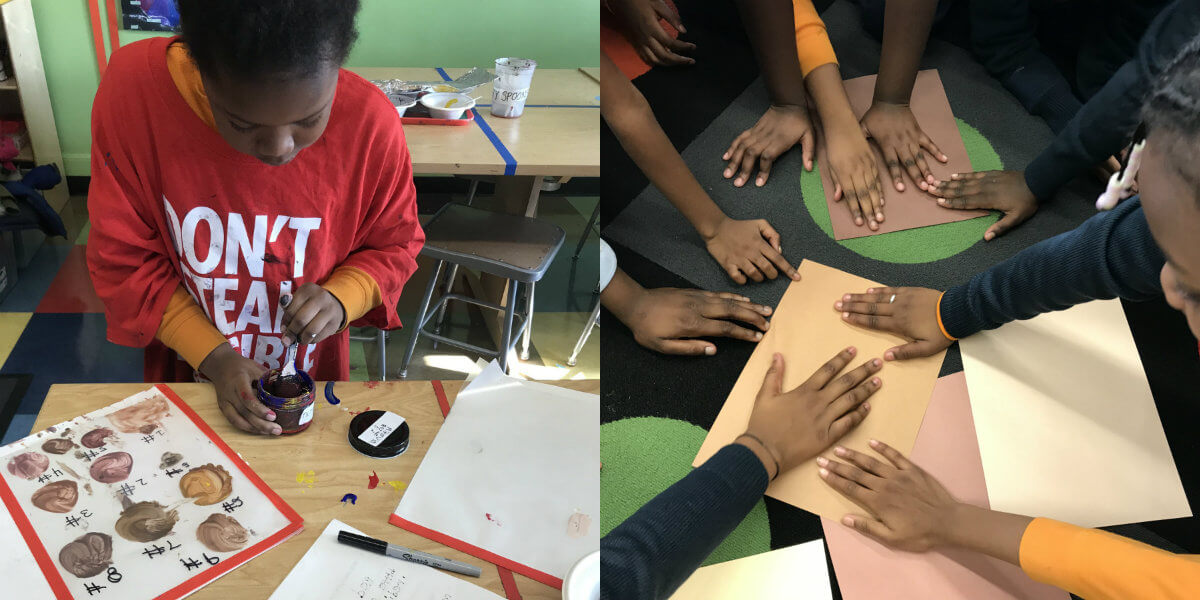 Later this month, families will join their kids after school for a special event. Scholars will share the poems they wrote to themselves about their skin, and families will participate in mixing paint to create their own skin tone color as well. Then, they’ll hang a mural of all of their unique skin colors to celebrate their community’s diversity. One scholar, Grace Williams, will share this poem that she wrote: This is me: imperfect, but still smart, fun, and silly — that’s me. You can disagree, but I know for sure, that’s me.

Learn more about this project here. We may be tiny, but we are mighty. That’s the mantra art teacher Erin Hupp encouraged the K-4 scholars in her Wednesday Art Club to adopt when she put on the school’s very first Tiny Art Show. She’d always had an appreciation for artists who created tiny art — for hours she’d scroll on Instagram looking at scenic paintings shrunken down to a mere three inches of canvas and meticulously sculpted clay hamburgers the size of a nickel. “Art somehow always finds a way to challenge your perspective,” Ms. Hupp said, “and I wanted my kids to see that. Then I thought, who better to create tiny art than my tiny artists?”

Ms. Hupp brought in tiny canvases (three by four inches) and set up stations around her room for her scholars so they could paint, watercolor, draw, or collage in miniscule form. Then, she set them free to express themselves: Tiny pizzas, tiny chicken nuggets, tiny birds, and tiny dogs were among the most popular designs. “Art projects that push scholars out of their comfort zone foster independence and patience. When you work smaller, it’s easier to make a mistake. You really have to be kind to yourself and start seeing those ‘mistakes’ in a new light.”

For the opening, Ms. Hupp stayed true to her theme, printing out tiny posters and providing miniature versions of snacks. She also hung her scholars’ artwork low to the ground and gave attendees magnifying glasses. “I wanted it to be intimate,” she said, “and really ask people to crouch down and study the work and its details. My scholars worked so hard and put so much of themselves into their work, so I wanted it to feel personal for viewers, too.”

Above, Ms. Hupp shows a scholar how to put magnifying glasses to good use as a tiny artist.

We’re Not That Different: SA Harlem East middle schoolers could point to Syria on a map. They could relay information about Syria they’d seen from headlines. But they didn’t know just how much they had in common with middle schoolers from Syria — not until their art teacher, Chia Chong, introduced them to the Memory Project.

The Memory Project is an art exchange initiative that encourages young people to think beyond borders and learn more about people from countries that are culturally different from the U.S. A child abroad shares a handmade drawing or painting with a child in the States, and an American student sends their own artwork back in response.

Ms. Chia’s school leadership team was immediately on board when she brought the idea to them. “I wanted my scholars to see a greater purpose for their art beyond just their technical skills, or creating a piece for themselves,“ Ms. Chia explained. “There are real, loving children in different countries that they might never get to meet, but we’re all more alike than not. Art is one of the most powerful ways to see that.”

Scholars first watched educational videos on Syria’s culture and history. When they received the artwork from the Syrian students, Ms. Chia allowed scholars to choose pieces that resonated with them. “My scholar Julio immediately zoomed in a picture of an anime character from Naruto. I remember seeing a look of genuine surprise on his face — he was also a big anime fan! Naturally, he had to draw a character in return,” Ms. Chia said. Other scholars made powerful visual connections. Angelina chose a drawing of a Syrian child’s school, and painted her own school in response. Saphire chose to respond to a green pineapple by drawing a character whose green hair mimicked the spiky leaves of that pineapple.

“I love ‘meeting’ other people through their artwork. I don’t even know them, but it’s cool to get an insight into their lives and see what we have in common,” Jade said. Saphire nodded her head in agreement. “I used to just draw what was in my head,” she said. “This project made me think deeper than that.”