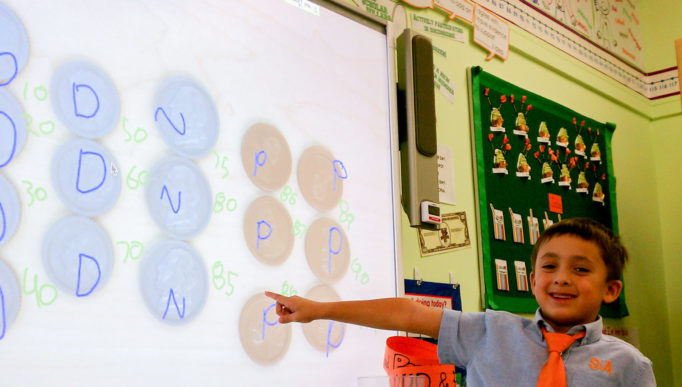 As a New York City public school parent I was never satisfied with what seemed to be a limited elementary school curriculum that only focused on reading and math. I was interested in the whole child approach to education and was thrilled when I discovered a Success Academy charter school was opening near our neighborhood. I quickly applied to enter the lottery for our then rising first grader, Owen.

There are many unique aspects of Success Academy’s curricula that set it apart from what our traditional zoned public school offered in kindergarten. I want to highlight the three main reasons why Success Academy works for our family:

Project-Based Learning: Owen has always loved getting involved in big projects. He likes to go into his room on the weekends and immerse himself in building cities with transportation hubs. It’s not surprising that he enjoys the project-based learning units at Success Academy so much. These units allow scholars to explore one topic in depth for four to six weeks across multiple subjects including science, art, reading and writing. They become experts on the topic as they ask questions and learn the answers through field studies and projects.

Owen and his classmates have become experts on beam, truss and arch bridges. They have visited Manhattan’s various bridges, including the Brooklyn Bridge and the Williamsburg Bridge. Owen’s favorite field study involved a ride on a ferry to look at those bridges up close from the water. In science, they are studying the architecture and engineering principles of bridges by building their own model of the Brooklyn Bridge. Owen has been talking a lot about caissons, which are the watertight retaining structures used to work on bridge pier foundations. Owen also comes home and tells me stories about John Roebling, who designed the Brooklyn Bridge.

Science 5 Days a Week: Owen is always experimenting. He routinely mixes up concoctions of toothpaste, food coloring, shampoo and soap in the bathroom. At Success, he gets to study his favorite subject five days a week, which was atypical at his zoned public school where he only had science once a week.

The science program at Success emphasizes hands-on, inquiry-based learning. All scholars perform a minimum of 135 experiments a year. Last year, when Owen was in first grade, his class did a really fun unit on the lifecycles of mealworms. The scholars did experiments on what type of habitats these insects prefer using real mealworms. This year he’s learning about crickets and their habitats and Owen can’t stop talking about it. The other day he asked me, “Mommy, do you know that crickets lay eggs with their ovipositor?” I, of course, had no idea what an ovipositor was. My six year old explained it to me perfectly; the ovipositor is an organ used by some animals for the laying of eggs. I wish I had learned that in second grade.

24-Hour Communication Policy: I love that I can text or email Owen’s teachers and hear back from them right away. Success Academy has a 24-hour communication policy. As a parent, you receive the cell phone number and email of your child’s teachers on the first day of school and teachers tell you not to be shy about using them. This is a main reason why we moved Owen from a zoned public school to Success Academy. I was frustrated with the lack of communication at our former school, where parent-teacher conferences were held only twice a year. At Success, I frequently talk with Owen’s teachers about his progress in math, writing and art. I have already seen his teacher for two parent-teacher conferences and it is only November.