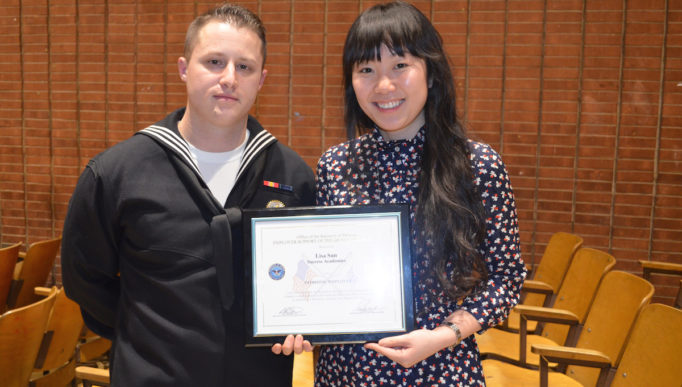 On Feb. 19, Success Academy Harlem North Central’s athletic coordinator, Chris Wetzel, set foot in our school for the first time since he took a leave of absence for a tour of duty as an intelligence specialist, second class, in the United States Navy Reserve. It was a very special visit, and the students and staff couldn’t wait to see him again.

Though we are grateful for Chris’ service to our country, we were heartbroken when he went out on leave, because he was an integral member of our school community. He not only coached our sports teams, he was an excellent role model for our students and a dear friend to everyone on the staff.

Chris went above and beyond what was asked of him. Besides coaching in the mornings and staying late for volleyball and soccer games, he ran a popular boot camp for teachers who wanted to get fit. He volunteered to cover social studies and ELA classes whenever teachers were out. Not surprisingly, Chris was voted “Person of the Week” at our school and awarded the Wolfpack Team Hat by his peers.

He also imparted important lessons to our scholars. He taught them to do the right thing even when no one was looking and to go out of their way to help others. He helped them learn to emphasize growth and character over scoring points and winning games. He showed them that humility is important and that hard work and dedication pay off.

Chris demonstrated this first-hand as a new Success Academy teacher. When I first met him in September, he had just started at SA Harlem North Central after completing a year of service at a naval base upstate, providing intelligence and other operational support to the brave men and women who protect our country at home and abroad.

He had been a middle school sports teacher upstate before joining the Navy, and he came to Success because he loves working with kids and missed coaching. But he had never been at a place that expected so much from the children and adults, and adjusting to the longer school day and fast-paced environment was a challenge. He told me he had never worked so hard in his life, not even in the Navy. But Chris was determined to succeed.

At the time, I was starting my third year of teaching at Success, and I agreed to take Chris under my wing. In just a few short months, he built many wonderful relationships with staff members, and was loved and revered by the scholars.

There was Yaeli, captain of the girls volleyball team, who was grateful that he had recognized her leadership abilities early on and trusted her with greater responsibility. There was Ivan, who came to school early every day to work in Chris’ classroom. Ivan and the other boys looked up to Chris, and they enjoyed talking about sports and the military.

At first, Chris was reluctant to talk about his role in the Navy, but eventually he recognized it as a powerful way to connect with the students.

Since his call to duty midway through the school year, Chris has been in frequent contact. Scholars call him and send messages through our teachers. Students have asked me to share videos of the basketball team and other scholar accomplishments with Chris, because they want him to know how the team is doing and that the players are still training the way he taught them.

Our school has not been the same since Chris took his leave of absence in December, but we were thrilled that he returned Feb. 19, even if for only one day. And it was a very special day, because he had the opportunity to thank everyone who has been so supportive of his service by presenting the school with a Patriot Award from the U.S. Department of Defense. Principal Lisa Sun and I were honored to accept the award.

Chris says he plans to return to the classroom after he completes his assignment. He is saving his vacation days and working weekends so he can return in time for the start of classes next fall. We all appreciate his service and look forward to him rejoining the SA Harlem North Central team.