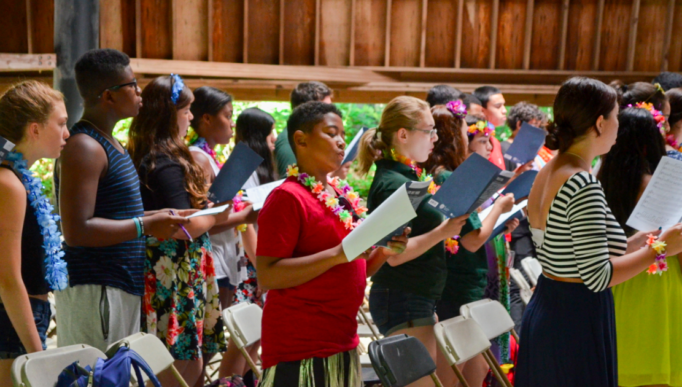 This summer, Success Academy connected scholars with several experiential programs, setting up camps for students who excel in chess, basketball, and soccer and partnering with the renowned Usdan Center for the Creative and Performing Arts, where four of our middle school scholars indulged their passion for art, creative writing, and choral singing.

Besides having fun doing what they love, our scholars were able to grow and learn more about themselves while having these experiences. Success Academy is working to identify more summer enrichment programs so more scholars with special interests can participate in the future.

On the last day of the Usdan summer arts camp, we caught up with four exceptionally talented scholars. The camp sits on a 200-acre woodland campus in Huntington, L.I. Some of its famous alumni include Natalie Portman, Jackie Hoffman, and Mariah Carey. Our scholars traveled more than one hour each way by bus; financial assistance from Success Academy and Usdan helped cover tuition and transportation.

We asked our scholars what sparked their love of the arts and what they learned this summer. We also heard from their school principals, who along with their teachers, recommended them for the program. Bria Couliboly, now an eighth grader at Success Academy High School of the Liberal Arts (HSLA), was chosen to attend Usdan because “first and foremost, she is enthusiastic about all kinds of learning,” said David Noah, her principal at Success Academy Harlem East. “Bria is a student who truly makes the most of opportunities—and always has a smile on her face. She is creative, whip smart, and extremely diligent.”

Bria: “I’ve been making art since I was 4. Since my grandmother passed away from cancer, I have done drawings that inspire other people who have cancer. I’ve painted the cancer zodiac sign and even a small chicken doing karate—the idea is he’s kicking cancer’s butt!

“I don’t usually take art in school because I’m busy with sports—I play volleyball, basketball, and tennis. I usually do art at home in my free time. I had never heard of Usdan before, but it’s been so much fun.

“At Usdan, my instructor Max is really cool. He plays music for us while we work and helps us when we’re struggling—I’m learning a lot. Here, I’ve done things that have pushed my limits. I’ve learned to paint on a much bigger canvas—I usually make only smaller pieces. I think my favorite thing I’ve painted so far was on a big canvas and was a huge face, based on a picture of a model. I’ve also done oil pastels and ink drawings at Usdan.

“Everyone here has been so nice and welcoming. When I came here, my first thought was ‘Wow!’ Because it’s so quiet and peaceful. It’s really fun—except for the bugs! I had a million bug bites the first week.” Another eighth grader at HSLA, Janein Brookes studied creative writing at Usdan. “Janein is the definition of a great scholar,” said Andrea Klein, her principal at Success Academy Harlem West. “She is eager to learn and try new things, works hard to excel in all of her subjects, and pursues her passions and talent with drive and joy.”

Janein: “I’ve been writing since I was about 7, when I noticed that my aunt and my cousin had the habit of writing down stories that popped into their heads. I think that influenced me to start writing down my own stories. Writing at Usdan is so much fun. Last week we did poetry, and the week before, we did horror stories, so that was really interesting.

“My favorite genre is fiction. I especially like writing fantasy because it takes you to a world that you can imagine but no one else can, so you get to explain that world. I like supernatural stuff—I wrote a story about a boy who could see the future but had no control over when he could see it. The story I’m working on now is more of a horror story; it’s about a girl who was forced to take care of an old man for community service, but she starts to notice that there’s something strange about him…he keeps going to this back room of his house. I’m still working on the ending.

“I’ve learned a lot at Usdan. When I go back to school, I will take back different writing strategies. I used to switch between characters and setting a lot, but now I really focus on one character. I’m hoping that one day I can take creative writing classes in college.” “Daryannos Kinney has been a standout performer in all of our school music productions, including his recent lead role in Once on this Island,” said Andy Malone, who first taught Daryannos when he was in fourth grade at Success Academy Harlem 4. “He impressed us last year as the only boy to stick with musical theater—despite some pressure from friends to play sports. Since I’ve known him, his self-professed career goal was to go into acting, and he has been researching summer opportunities in the performing arts ever since.” Daryannos will start eighth grade at HSLA, where Mr. Malone is now principal. At Usdan, Daryannos sang in the senior chorus.

Daryannos: “I’ve been singing since I was in kindergarten. When I was little, I used to listen to music a lot. My big brother plays the guitar and the piano, so some of his talent rubbed off on me. I play guitar now too, and little bit of piano, and some drums. I like to listen to hip-hop, and I like writing songs that connect more to teenagers. Sometimes, I play music with my brother.

“At Usdan, I learned how to read music, and I learned that I’m a soprano. Today, we’re rehearsing a choir song called “I Am Not Yours.” It’s based on a poem. I like hip-hop, but I also like to sing songs like this one.

“When I grow up, I want to be an actor and a singer and be in musicals. To achieve this dream, I want to go to college at Juilliard. To get into Juilliard, I’ll need to have good grades and focus on improving my voice every year.” A sixth grader at SA Harlem East, Macdonald Dessources was selected for Usdan, where he sang in the junior and senior chorus. “Macdonald joined chorus at Harlem East even though it was totally new to him, and dove in enthusiastically,” said principal David Noah. “By the end, he had developed into a budding musician—he even provided djembe (drum) accompaniment to the rest of the chorus at SA Harlem East’s graduation this year!”

“For the final concert, I performed in the major chorus. My favorite piece was “Sir Duke” by Stevie Wonder, because it’s a good song to move around to and it’s jazz, which is one of my favorite music styles.

“At home, I like listening to jazz, hip-hop, and rap. I started singing when I was 9. At first, I was afraid of what people might think, but then people thought I had a good voice. When I’m on stage, I’m nervous, but I always try my best. Singing makes me feel powerful.

“I think that Usdan is a great place. You can try out new things—I got to try archery, which I really like, and dodgeball. The first day, I was shy with other people in my group, but then I found out I had a lot in common with them, and we got to collaborate during rehearsals. I’ve made a lot of friends.

“We’re doing two concerts and we’re also going to perform at a gala. In the future, I want to be a hip-hop singer or a rapper.”