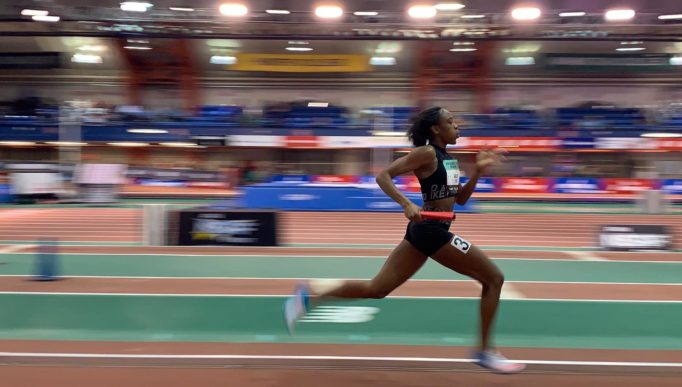 Track coach and teacher Ozzie Henderson rarely sits still. When he’s not handing out energizing snacks to his athletes, he’s pacing back and forth and glancing at his stopwatch. He gives the impression of someone always thinking of the the next race — even as his sprinters cross the finish line in record-setting time. Coach Henderson’s focus and determination are pushing Success Academy’s track program to the next level, as this year’s indoor season and championship meet made clear.

The program has been the quest of Coach Henderson ever since he joined Success Academy as a chemistry teacher in 2015. A former collegiate runner himself — he ran hurdles at La Salle University — he knows what it takes to stay motivated as a scholar athlete. What makes the Success Academy program stand out under his leadership, however, is that each year Coach Henderson has found new ways to take the program to the next level: designing a rigorous electives program so his runners can practice the technical aspects of the sport (such as hurdling 101)  in addition to after-school practices, and hiring elite college athletes such as Simone Grant to bring additional expertise to the team.

This year, aware that his runners needed to build strength if they wanted to continue to improve their times, Coach Henderson brought a weight training element to the program; Coach Grant is now certified as a personal trainer so that she can provide individualized support to each athlete. The gains are evident, even among the younger members of the team. This season, Mohamed Traore ran the second fastest freshman time in the state in the 55m dash.

Over the years, Coach Henderson has had to get creative to make sure his athletes got what they needed. In spite of having some of the top running talent in the state, the Success Academy team has been denied recognition by the Public Schools Athletic League; this means that our track stars’ times don’t register on the public school leaderboards. Coach Henderson’s solution? He enters the team as independent runners in open invitational collegiate meets — which means that the SA track team often lines up toe-to-toe with college runners. That fierce competition has helped build his runners’ confidence; at this year’s Dartmouth Invitational, several Success athletes ran faster times than the collegiate participants.

This year eight Success Academy athletes qualified for Nationals — the most in HSLA history. Next year, the goal is to bring at least 12 scholar athletes to this highly competitive meet, where teams come from across the country to race for the championship. With a packed stadium and races stacked with talent, SA runners supported each other and kept their focus in the face of pressure. The result:

All our runners compete in the emerging elite division, an invitation-only category designed for athletes who are likely to end up running at the collegiate level. In fact, two of our athletes have already earned the attention of college coaches — and senior Talese Evans will be joining UPenn’s team next year. Congratulations to Coach Henderson for building a team worthy of the emerging elite title! Cover photo: Senior Talese Evans keeps her head up down the stretch of the 4x400m. Photo by junior Luis Plaza.