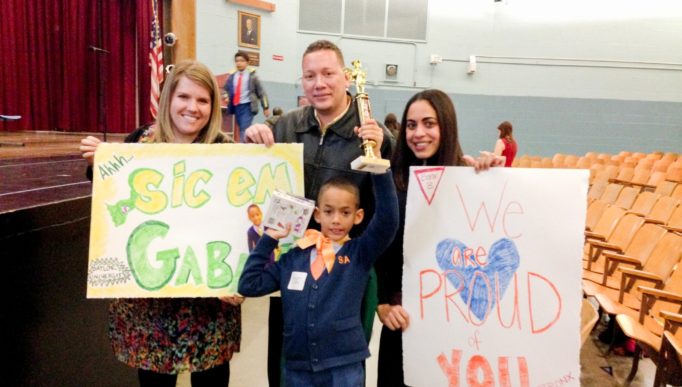 How fast and accurately can you do math?

Let’s put a few seconds on the clock for each math problem below and find out:

Counting by 5s starting with 5, what is the 11th number in the sequence?

Shanae has 5 nickels. How many nickels does Shanae need to have 12 nickels?

If you found some of these problems a bit challenging, consider brushing up on your second-grade math skills.

Gabriel Rosa Garcia, a second grade scholar from Bronx 3, survived 12 rounds of competition to win this year’s Success Academy math bee. Gabriel and 17 other second graders were chosen by their respective schools to compete in the network math bee, which tests the ability of scholars to compute with speed and accuracy.

(Similar math bees for other grade levels were held last week and continued through November 18th. You can see photos of all the winners here.)

The math bee is an annual tradition at Success Academy that invites scholars to flex their math muscles in front of family members, teachers and peers. The questions are crafted to align to Common Core fluency standards, but also go beyond simple calculations or facts that must be memorized. Some questions, for example, require scholars to listen to a story and decide which operation to perform in order to get the answer.

Through the experience, scholars gain confidence in math and public speaking.

At the second grade math bee, Williamsburg principal Abby Johnson fired off one of three questions she had left after 12 rounds: “90 minus 42?”

With a few seconds left on the clock, Gabriel offered the correct answer: “48!”

We later caught up with Gabriel to ask him about winning the math bee.

Q: What did you do to prepare for the network math bee?
A: My teacher, Ms. Dammon, helped me practice my math facts.