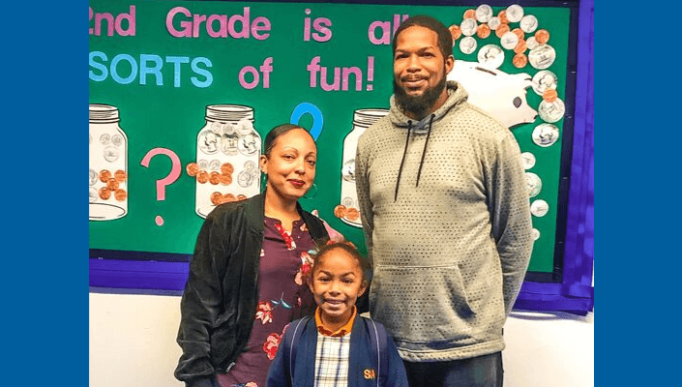 When Jamaal Salah and Alexandria Aponte decided to enroll their daughter Sanaa in Success Academy instead of continuing at NEST+M, a citywide gifted and talented school, they hoped it would be the last time that she would need to switch schools. They were happy with NEST, but the commute from Queens all the way to the Lower East Side was taking a toll on their family.

When Success Academy Far Rockaway opened and Sanaa won a spot in the lottery, Jamaal viewed it as the perfect solution. Now, she could receive a rigorous education in a location that worked for his family, and she would be guaranteed a spot all the way through 12th grade. Imagine his dismay when he learned that that hundreds of Success students might be left without a middle school in Queens; Sanaa is only in second grade at SA Far Rockaway, but he felt deeply for the families of fourth graders facing the immediate prospect of no middle school. He worried that he might face the same situation when Sanaa reached fourth grade.

Jamaal felt he had to act; he’s joined Success Academy families, teachers, and staff to demand that Mayor de Blasio keep his promise to children in Queens. Even though there are empty buildings in Queens and hundreds of students in need of a great middle school, the Mayor continues to deny families a place for their kids to learn. It hasn’t been easy to fit advocating into his packed schedule, but Jamaal and fellow parents have decided that they will do anything they need to do to to assure their kids’ right to a great school.

Ahead of next week’s rally, we caught up with Jamaal to hear more about how this dad has gone the extra mile for all kids.

What have you done so far?

When we learned that the educational future of our scholars was at risk, we came together to get in front of as many government officials as we could. So far, we’ve met with Assemblywoman Amato, Senator Sanders, and Council Member Richard’s chief of staff. In those meetings, we’ve been talking about our experiences as parents and explaining why we have an issue with the Mayor not providing space for Success Academy middle schoolers in Queens. We tell them just how much we love our school — I explain how I’ve watched my daughter break out of her shell at Success as an artist and a dancer, coming to Far Rockaway after attending NEST. I tell them how excited I am that she wants to try out for the basketball team this year. And I explain that there just aren’t these options available at other schools in our area.

There’s also the petition, which really speaks to just how many people care about and are affected by this issue. I helped deliver the petition to the Mayor. I hope he realizes that 11,000 signatures just can’t be ignored.

What has surprised you?

I discovered that it’s exciting to be heard! There’s this perception that all politicians are smug and that they have their own agenda to follow. The ones that we’ve encountered on this journey have been open-minded and ready to listen; they haven’t been combative. It really felt as though they were just trying to hear how we feel about the situation. The thing that shocked me the most is that they love to hear from children. When children come to these meetings, the officials basically disregard the parents — they want to hear directly from our kids. They really take the worth of young people in considering the arguments, which makes me believe that we’re all paddling in the same direction. We just need to put kids before politics.

Why do you advocate?

I specifically remember the first time my wife and I saw Success Academy posters in the bus stop. We’d heard of Success and we were pretty excited that a school was coming to the neighborhood, because we wanted our daughter to be challenged. So much so, that we were willing to commute each day to take her to a Gifted and Talented kindergarten all the way in the Lower East Side. The thing is, we shouldn’t have had to! But the reality is that there aren’t quality options in our area, and Success came in and changed all that. Families don’t need to pay thousands of dollars a year to get this quality, world-class education. I want my daughter to be able to continue in a school where she thrives — but I also want other families to have the opportunities that my own daughter has.

Your daughter is only in second grade. Why are you fighting now?

I’m deeply committed to being involved in my daughter’s education and her school community in general. But I also really feel that this is my lane — I can give back while also playing an important role as a dad. To be honest there are a lot more women than men who attend meetings; I think it’s essential that there’s a variety of representation and perspectives on our committees, so I try to lead by example in that way.

Our journey at Success has been so great so far. Like most new SA families, we had a learning curve — we had to get used to how things are done, but once we did, our daughter started to exceed our wildest expectations. It’s a story you hear again and again from parents in the SA community.

Can parents really make a difference?

We’re making a difference already. We’ve hit the ground running from the moment the battle call came, coming together to make our voices heard. We’ve basically flooded the Mayor’s office. We’re in the news. It might feel slow going, but we just have to keep on. Even if we lose this fight, we’ll reconvene and stay steadfast. We have to fight this fight for our kids.