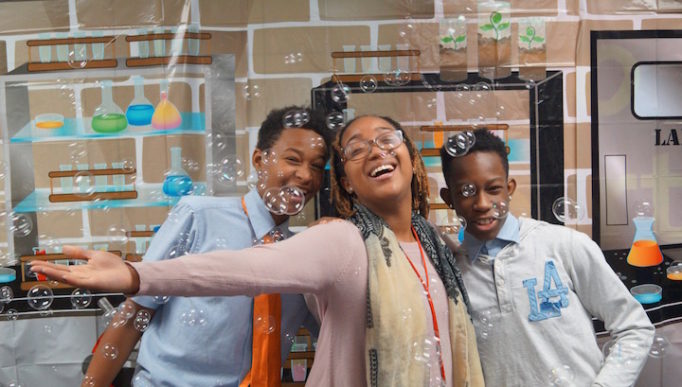 What would happen if the earth got too close to the sun? How could any living creature survive the Big Bang? Is there a way to keep your plants watered if you go on a month-long vacation?

Every day, my scholars ask dozens of questions like these. Their curiosity is never-ending and their minds are always yearning to learn more.

But as much as I want our scholars to ask and wonder, the reality of the classroom is that often, we simply don’t have enough time to dive deep into every topic a student is interested in.

That got the SA science team thinking: what if, for one unit out of the year, we could let our scholars not just ask whatever questions they wanted, but also find the answers themselves?

Enter Success Academy’s first-ever Science Exploratoriums, which were held this week at all 11 SA middle schools.

The Exploratorium is Success Academy’s innovative take on the traditional science fair, designed to empower our scholars to gain academic independence as well as develop invaluable scientific research and presentation experience.

And so, over the past month, in preparation for the Exploratorium, my classroom has been littered with everything from models of tectonic plates to hydroponic gardening devices to trifold posters detailing the final days of the Mesozoic Era. My scholars, and those at every single SA middle school across New York City, have been working independently to study a scientific question of their choosing and to design prototypes that solve engineering challenges. Each scholar was responsible for designing and conducting experiments from start to finish, thinking through the organization of their data, and creating three components for a presentation: a written piece (like a poster board), a technical piece (such as a supplemental video), and a physical piece (a model).

While many scholars produced outstanding work, one pair of scholars in particular, Breanna Eastman and Marqkuis Phillip, were especially passionate about a challenging topic: fracking. In our previous unit, focusing on rocks and geological time, I had mentioned the controversial process of fracking offhand, and from that point on, Breanna was captivated. I was struck by Breanna’s interest, and loved that she wanted to both learn more about it herself and spread that knowledge to others — a perfect match for the Exploratorium.

This is Breanna’s Exploratorium story:

From the first moment I heard Ms. Easton explain fracking — one method to get oil from the ground — I was fascinated. She explained both the pros and the cons and said that the topic was an important environmental issue, but it wasn’t clear to me which side was right.  Should fracking be allowed? Why can’t we have a straightforward answer?

So when a few weeks later Ms. Easton told our class about the Science Exploratorium, I immediately knew what I would do: find out what exactly was going on with fracking.

Of course, one reason I was so interested in learning more about fracking is because I care a lot about the environment and want to do my part to be help make a cleaner planet (for instance, I recently became a vegetarian). I also believe more people need to understand how easily humans can impact our world. Fracking may help our society by providing energy, but it can also harm the environment by contaminating water and even causing small earthquakes.

To really understand fracking, though, I needed to do my fair share of research. After all, how could I convince my Exploratorium audience that fracking is a risk to the environment if I couldn’t prove it with facts?

But finding facts was harder than I thought it would be. At first, my partner Marqkuis and I depended on Google and read as many articles as we could about fracking. But so many websites were very opinionated and told only one side of the story. When we explained that this issue was coming up in our research, Ms. Easton taught us a valuable technique. We couldn’t just click on the top link on Google or summarize Wikipedia. Instead, we had to find college or government websites — “.edu’s” or “.gov’s.” Those sites, Ms. Easton explained, are usually the most reliable — the authors are interested in the truth, not opinions.

With the many different sources we looked at, Markquis and I saw first-hand why there is such a heated debate. From the beginning, Marqkuis was very interested in the pros of fracking. He kept focusing on how it was a cleaner, safer alternative to oil drilling that deserved consideration. But, when I looked at our research, I felt strongly that the cons deserved more attention because fracking was causing serious harm to our environment. Surely there is another solution to our planet’s energy problems!

I think my experience with Marqkuis is what the Science Exploratorium is really all about — learning science from my classmates and communicating and debating big ideas with one another. We’re not just explaining it to our teachers in school or reading out of a textbook. We’re learning child-to-child.

And that’s why the Exploratorium on Tuesday was so special. I answered my classmates’ questions — my audience was especially interested in the impact fracking could have on normal people’s lives. It was my chance to teach them that we need to treat the Earth like it’s a family member.  If we treat it well, it will treat us well back.

Because of the Science Exploratorium, I’ve been able to do my part to teach people about the dangers of fracking, all while learning how to conduct  scientific research. I was thrilled to learn more about the environment, and I’m excited to learn even more in the future.