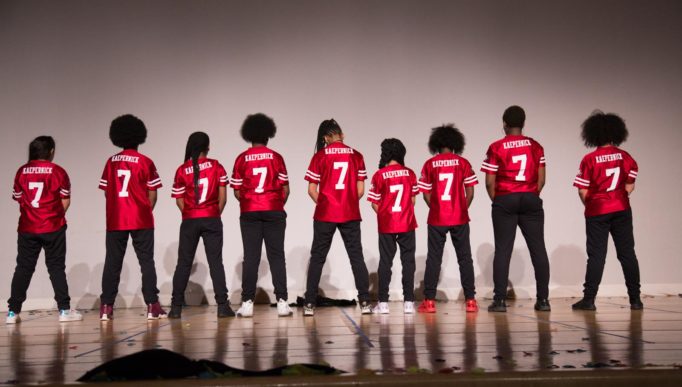 Last Wednesday, Success Academy Bronx 2 scholars Celya Bassinga, London Gordon, and Aminata Tall addressed an audience of hundreds, gathered at the auditorium of Success Academy Union Square, with a question: “Have y’all ever been to a party, where there was only one fool in the middle of the room, dancing harder and yelling louder than anyone in the entire place?”

They answered the question in unison: “Well honey, that fool was me.”

The group’s lively performance of a scene from George C. Wolfe’s play, The Colored Museum drew laughs and inspired reflection at the fourth annual Success Academy Performing Arts Showcase. The three helped the audience imagine the conversations of influential black leaders, from Nat Turner and Bert Williams, to Malcolm X and Angela Davis, at a fictitious party.

Throughout the Performing Arts Showcase, scholars fused their passions for dance, song, and theater, with strong social messages about racial equality.

Throughout the Performing Arts Showcase, scholars fused their passions for dance, song, and theater, with strong social messages about racial equality.

Success Academy Harlem North West’s dance piece, “A Journey of Passive Resistance,” was another highlight. According to SA Dance Teacher Mickey Sakai, the scholars’ performance reflected their desire to call for resistance to the subtle and overt racism that exists within the United States.

“The piece is a statement about peaceful protest,” said Sakai. “My students were interested in exploring what they could do as artists to resist racism, and we decided dance was the right way to channel these beliefs. We brainstormed about who we wanted to honor, people like Rosa Parks, Sojourner Truth, Martin Luther King Jr., and Colin Kaepernick. We wanted to go beyond the hashtags associated with these movements, like #takeaknee and #blacklivesmatter, and make sure we engaged with these ideas in a meaningful way.”

Across the network, students rehearsed their pieces for over two months — scholars at SA Harlem North West even voluntarily gave up their recess period to get the piece just right — and practices that ran well after the end of the school day were commonplace.

“I don’t dance just to impress — I dance to express my feelings,” said SA Harlem North West seventh-grader Brianna Moore. “My team worked so hard to get this performance right. This theme was really relevant to what I read in the news about black rights issues. Performing this piece makes us feel like we’re part of the recent peaceful protest movement that Colin Kaepernick started — which is something bigger than ourselves,” she said.

The Performing Arts Showcase featured 11 acts — from musical theater performances and energetic dance routines, to upbeat choir songs and African drumming. Every group auditioned for the chance to represent their school at the showcase. We know you’ll be inspired as we were by their talent.